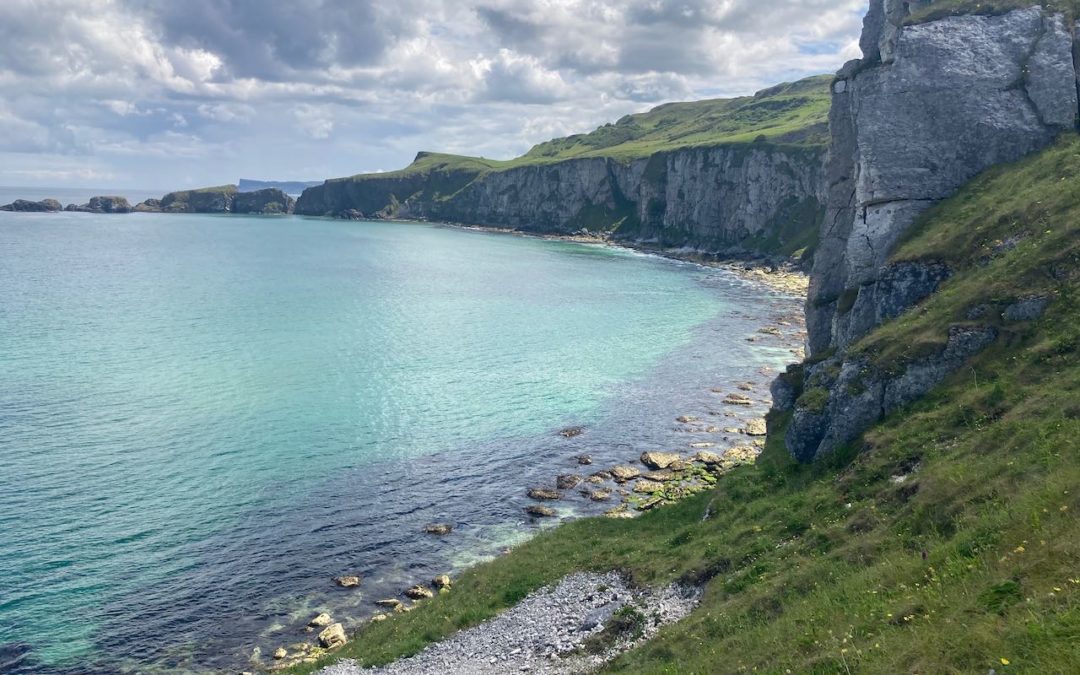 From Edinburgh, we drove to the town of Cairnryan where we had a ferry booked to Larne, Ireland (just north of Belfast). We were due on the ferry at 8:30 am, long before Quinn awakes. So we camped in the ferry terminal parking lot the night before and let Quinn sleep in the back as we queued to board the next morning.

As we drove onto the ferry, we saw signs saying that passengers weren’t allowed to remain in the vehicles during the crossing. So we quickly and rudely woke him up and we all made our way upstairs. The ferry was very comfortable, and we took the opportunity to get coffee and breakfast during the sailing. Quinn, of course, found a way to game.

The “Emerald Isle” is made up of two separate countries. Northern Ireland, where the ferry dropped us, is still a part of the United Kingdom and uses the British Pound for currency. The majority of the island is covered by the Republic of Ireland, an EU member state on the Euro.

We decided to head north around the top of the island and then make our way down the west coast. We took a scenic, winding coastal route north from Larne where we spent a couple of days enjoying the beautiful coastal scenery and touring the Bushmills whiskey distillery. 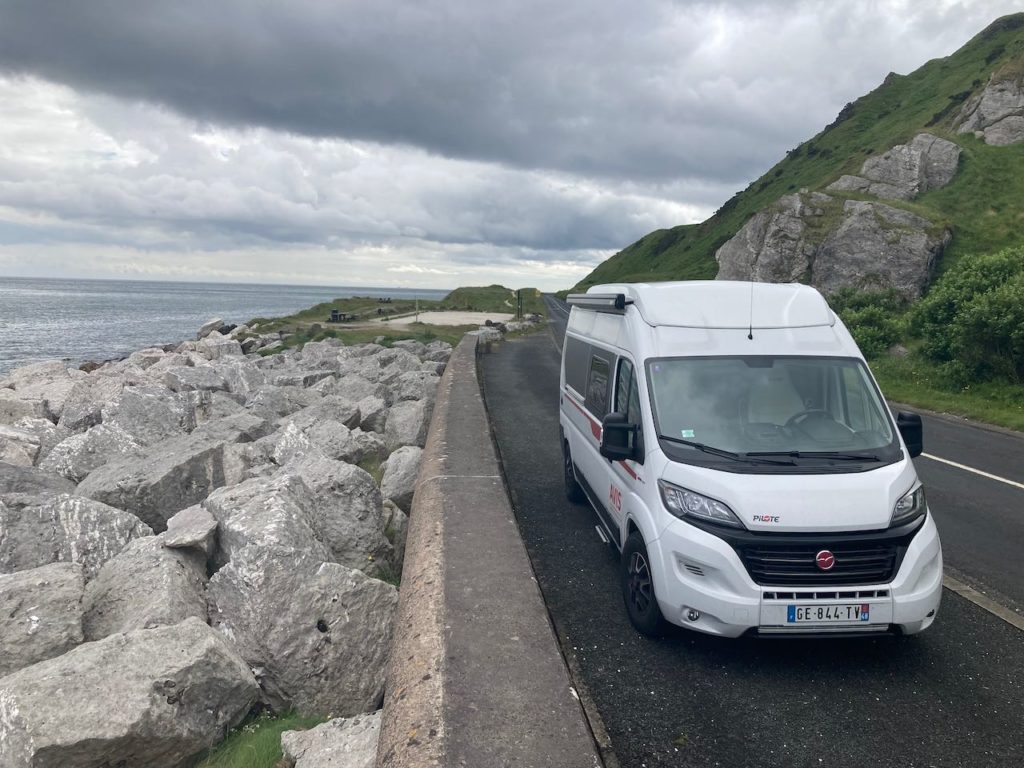 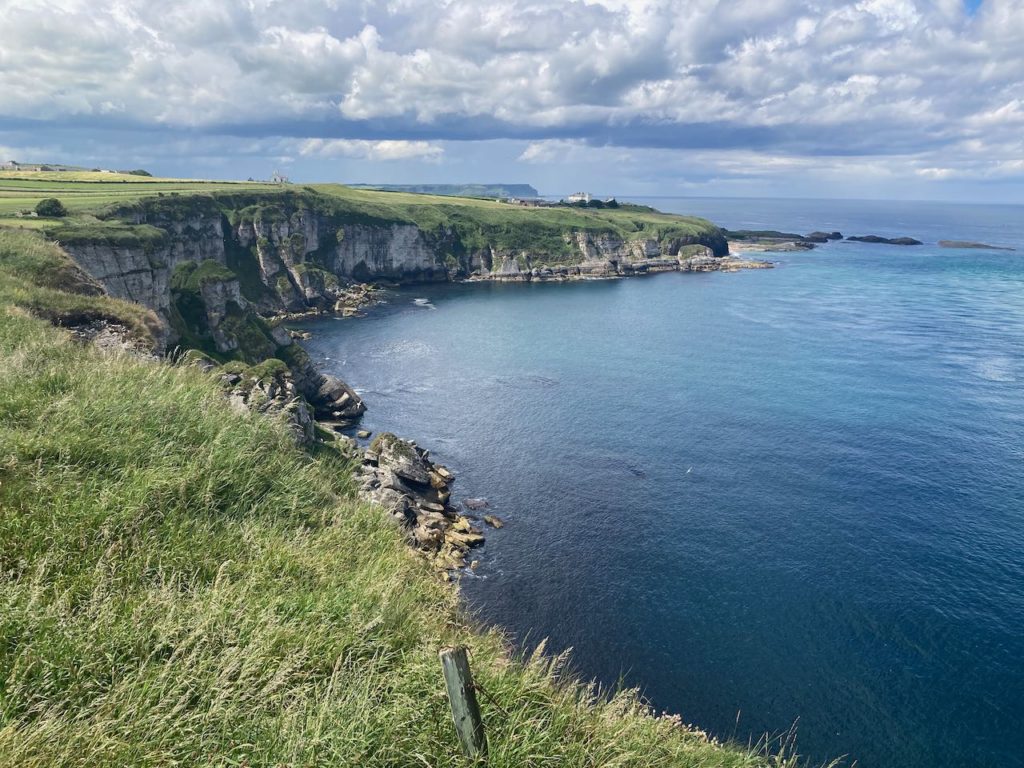 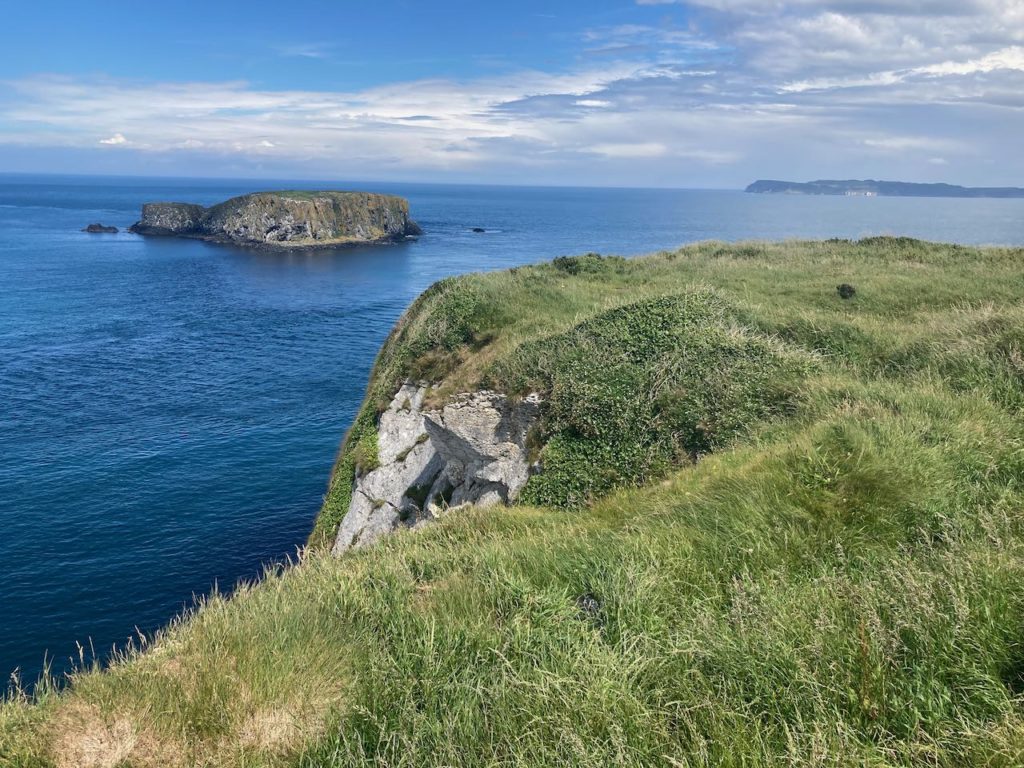 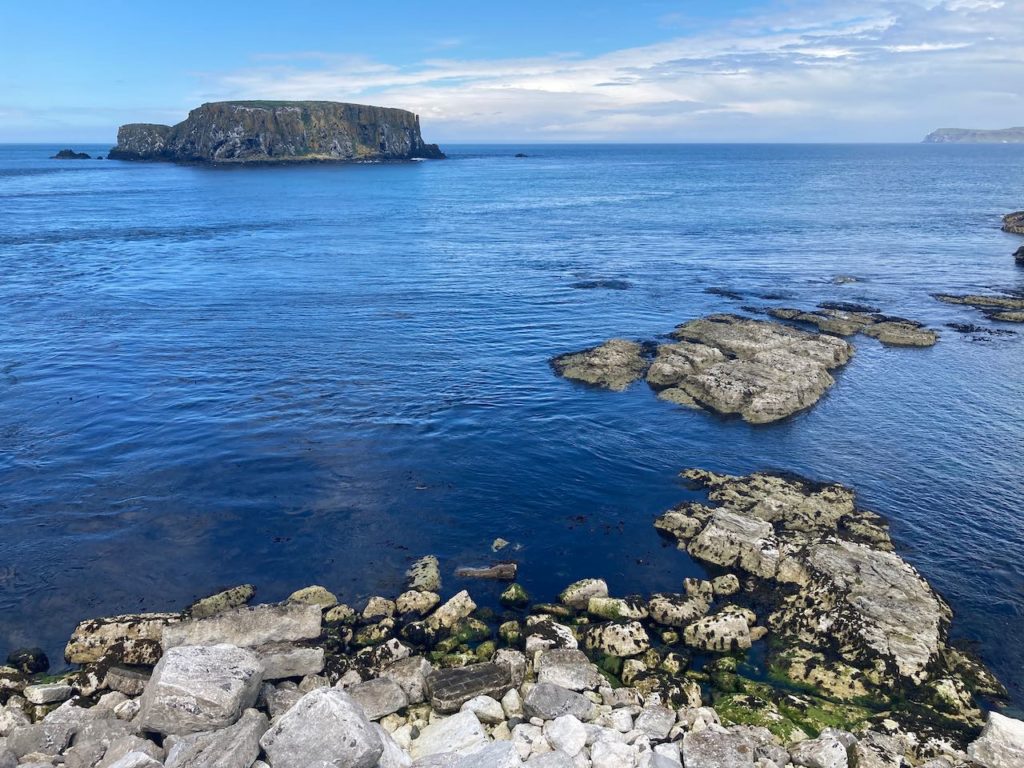 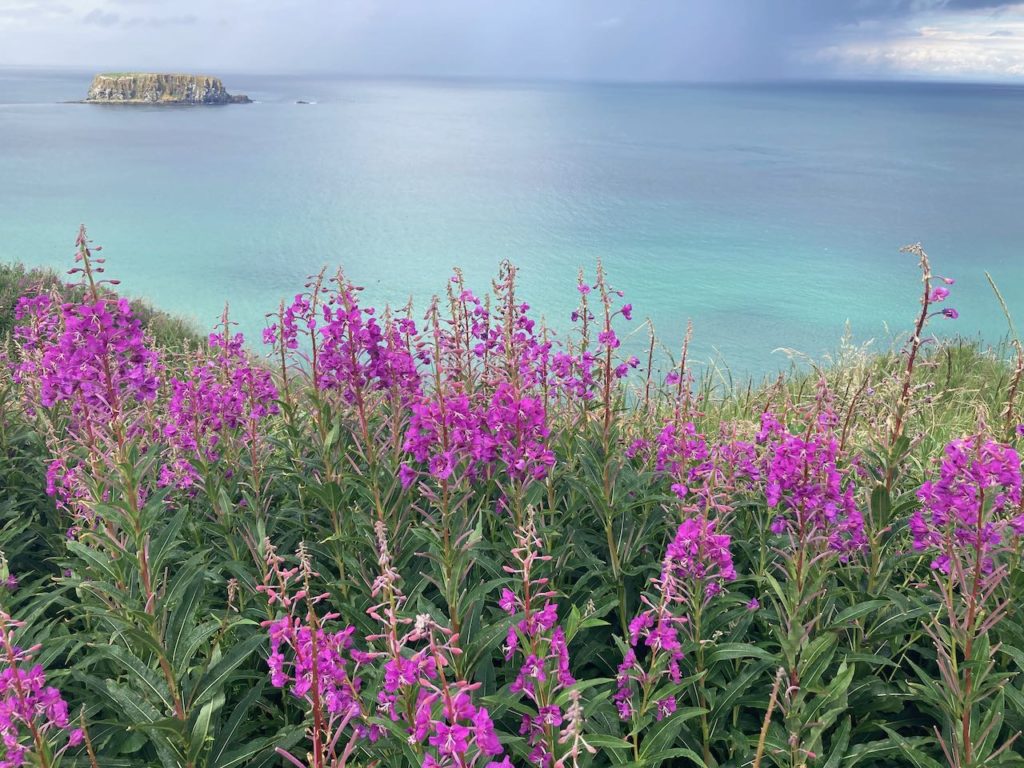 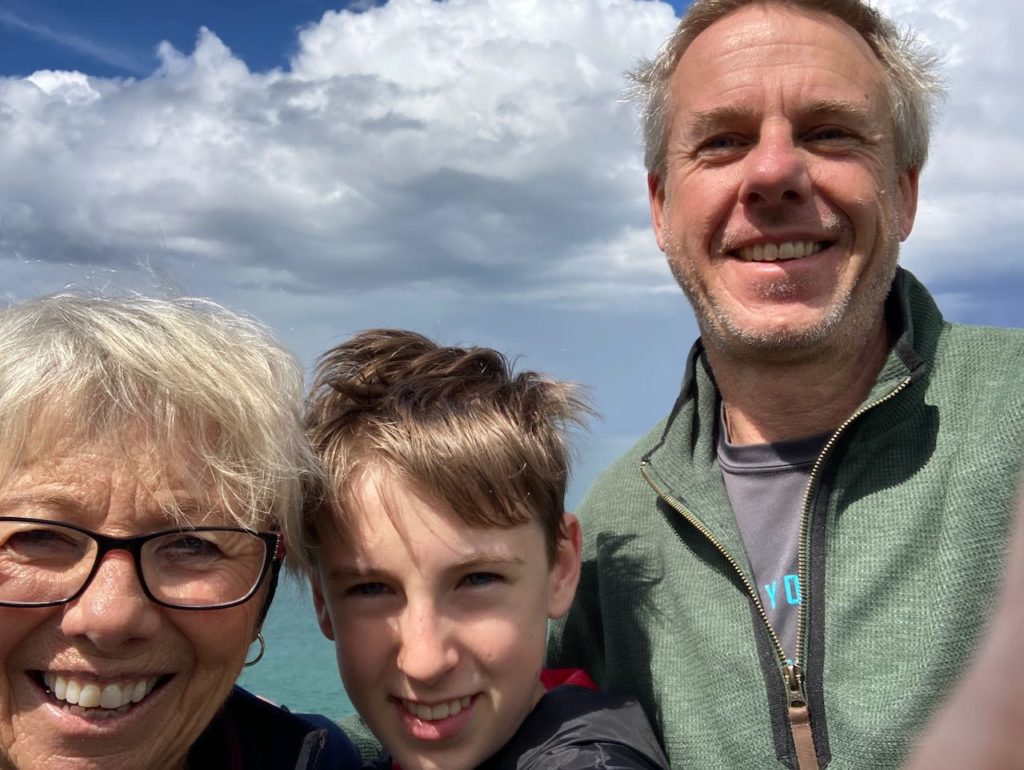 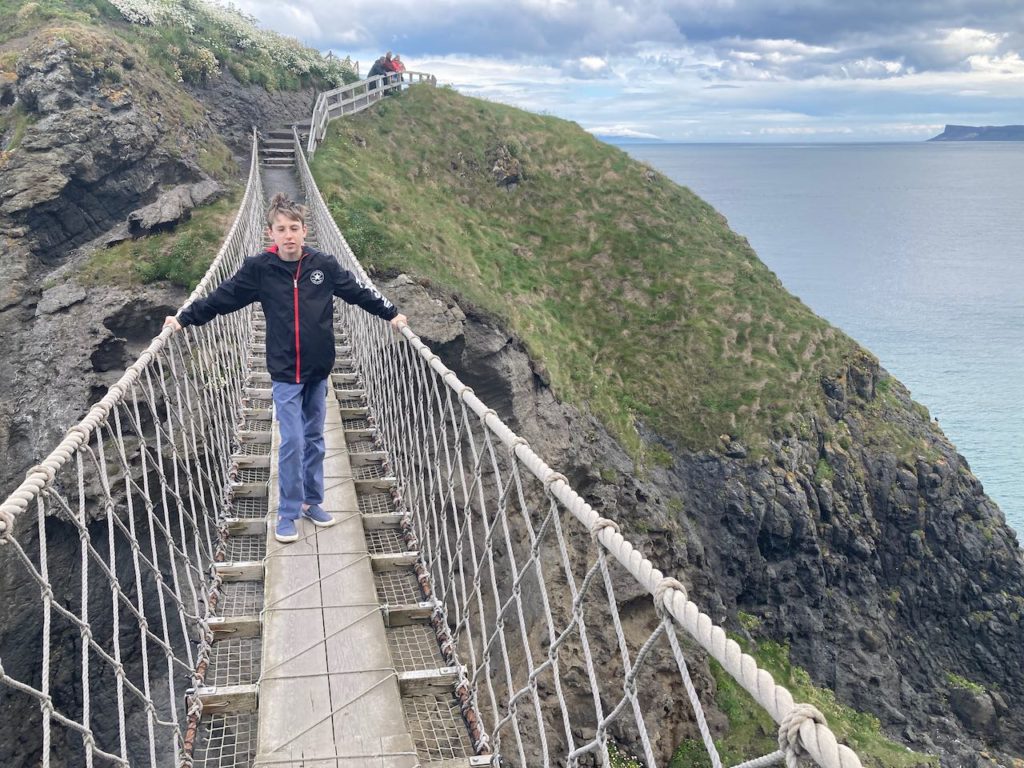 The photos above are from our drive north and Carrick-a-Rede, a rope bridge to an island originally built by fishermen. The next day we visited the Giant’s Causeway, a geological formation featuring hexagonal stone blocks.

After a brief stop in Derry for lunch and a haircut for Witt, we crossed into the Republic of Ireland on our way to Donegal. Some towns are more camper-friendly than others. In Galway, for example, we struggled to find a place to camp. The few commercial campgrounds around had horrible reviews and were very expensive, and most of the parking lots have height restrictions (barriers set at 2.5 meters intended to keep out vans). Donegal chose a different approach, allowing campers to park in a public parking lot in the harbor. This is great since it means we’re very centrally located within easy walking distance of town and we have a view of the water. The downside of course is that we can’t plug in and being in town it can sometimes get noisy.

We spent three pleasant days in the area including an overnight trip farther west to see the sea cliffs of Sliabh Liag. 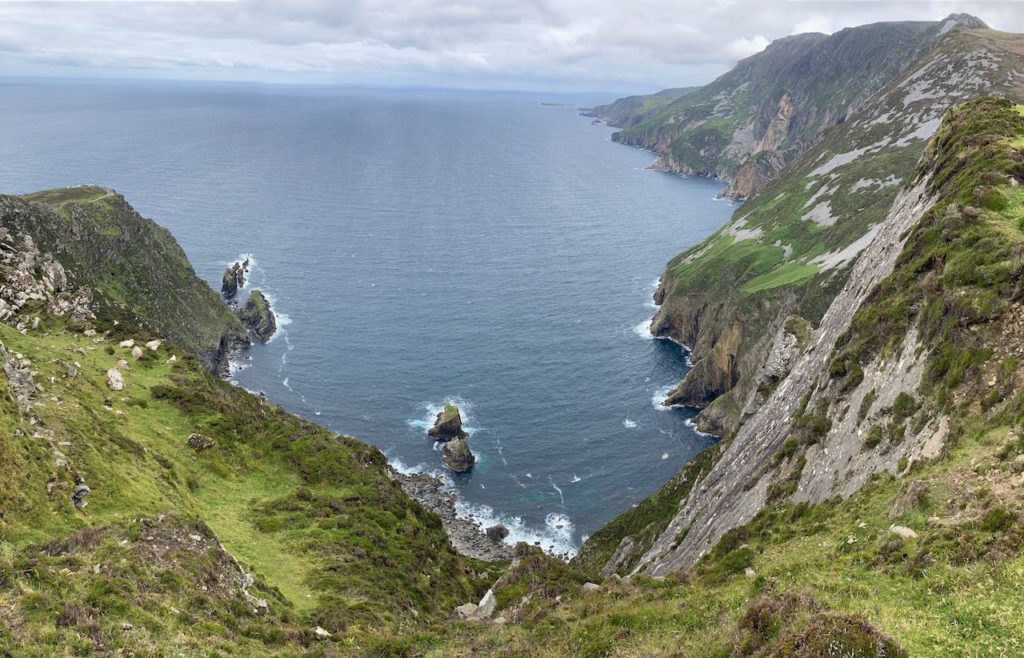 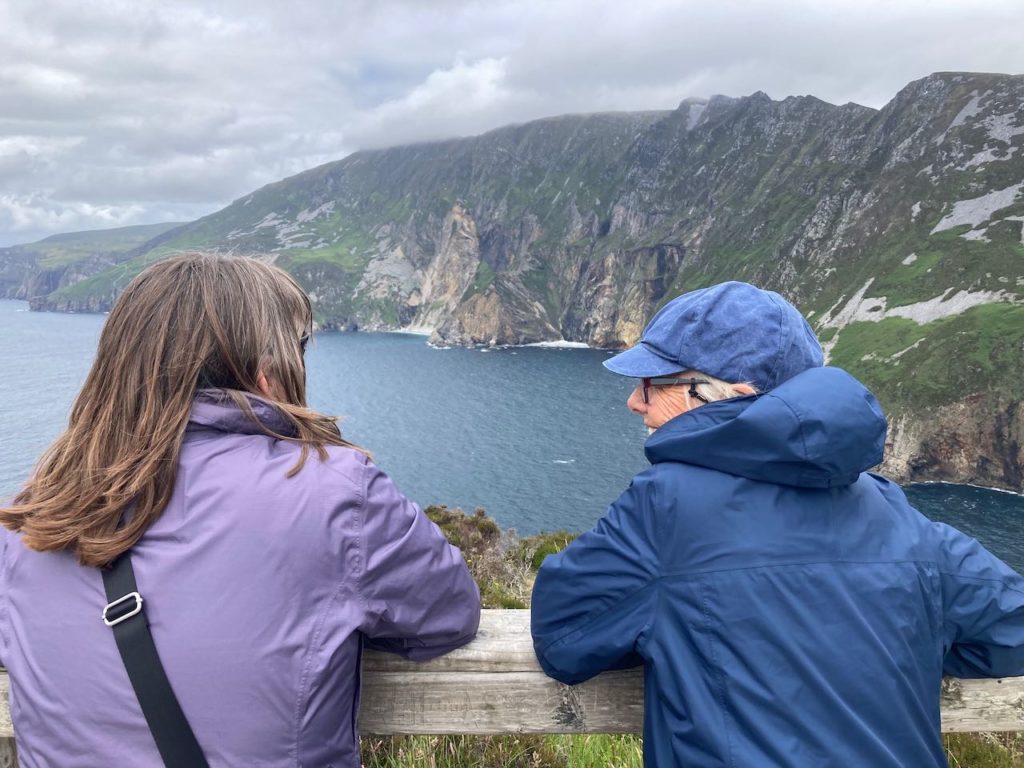 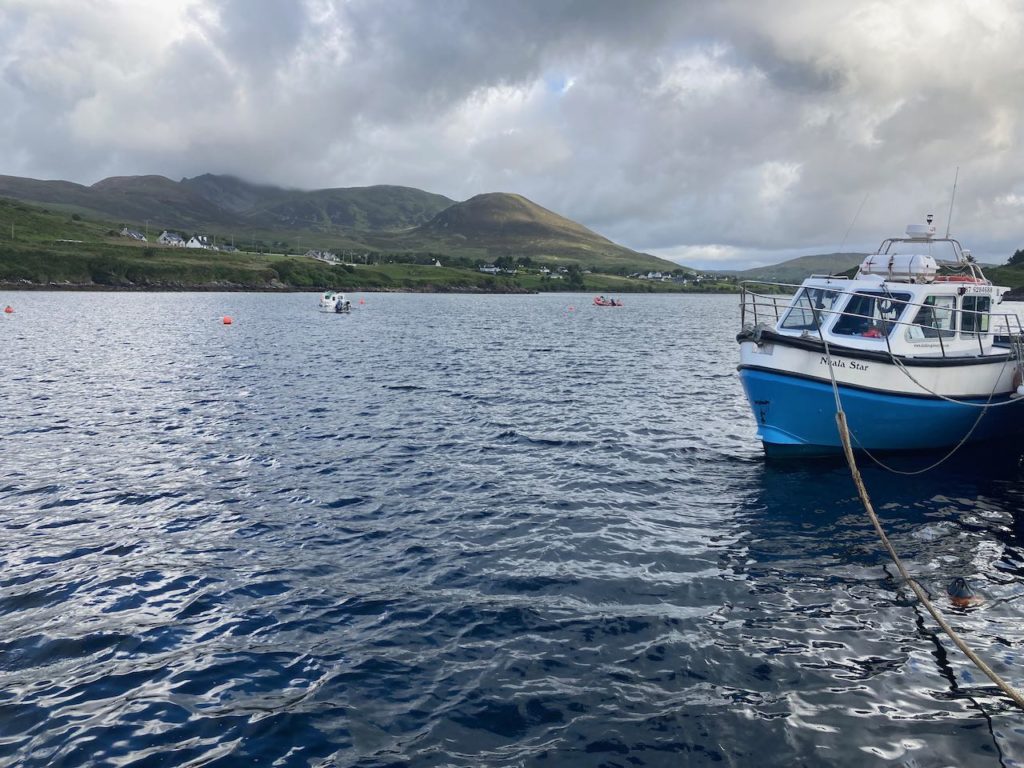 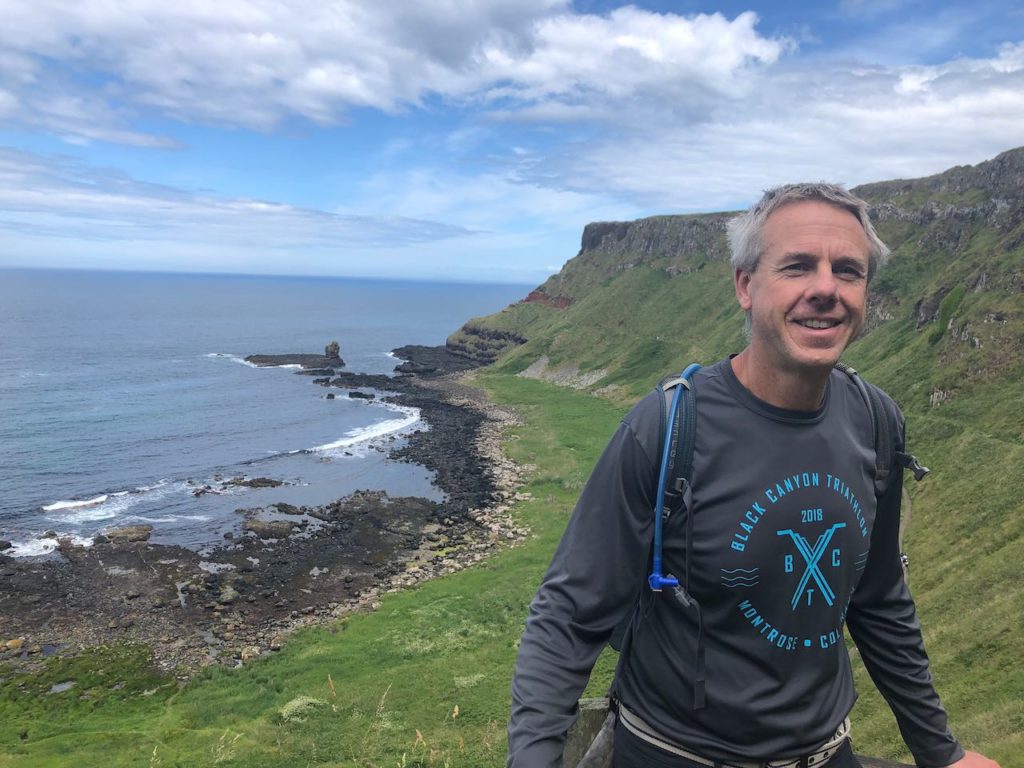 To be honest, we’re getting a bit of castle fatigue, but we did walk through the Donegal Castle, since it was built by the O’Donnell family, of the same name as one of Jen’s good friends from Pennsylvania (shout out to Susie!). One interesting feature of the castle was a perfectly ordinary-looking curved staircase, but with uneven “trip steps” to confuse invaders unfamiliar with the castle, and the fact that the staircase curves to the right leading up, giving a right-handed defender from above more room to wield his sword, and forcing the attacker’s right hand into the wall. Glad I don’t have to design my house that way!

In Donegal, we picked up the Wild Atlantic Way, a tourist route that covers the entire western coast of the island. Apparently, if you were to follow the entire route you would cover 2500km winding in and out of every tiny village and harbor along the way. This would take months, and the Irish tourism board would love you for it!

One of Quinn’s friends from Montrose (hey there, James!) says that the best pizza he’s ever had was from Dough Bros in Galway, so we had to give it a try. We drove down from Donegal on a Sunday, looking forward to our pizza and having a wander around town. Unfortunately, the pizza place was closed until Wednesday, and the place we’d found to camp (at the harbor again) was blocked off to make space for the unloading of giant wind turbine blades from a ship.

Instead, we drove out of town and found a place to park at a park-n-ride. It was quiet, but nothing special. We’d booked tickets for a traditional music and dance show for the next evening, so we decided to spend that day driving out to Connemara National Park. The day was overcast and wet, and it gave the mostly treeless terrain a mystical feel.

We were very impressed by the show, Trad on the Prom. It was put on mostly for tourists, but the music and dancing (by big-name artists) were amazing, and we had a fantastic time.

Our next stop was the Cliffs of Moher, the most visited outdoor attraction in Ireland. We stopped for two nights so that Witt and Jen could complete a day hike from the north to the south end of the cliffs. We set off bright and early at 11:30 am and even though it was overcast we enjoyed the walk along the cliff edge. Soon the mist rolled in and we couldn’t see anything except for the fog sweeping upward off the cliffs. Jen elected to turn back and I kept going, spending an hour at the very well-done visitor center halfway through. 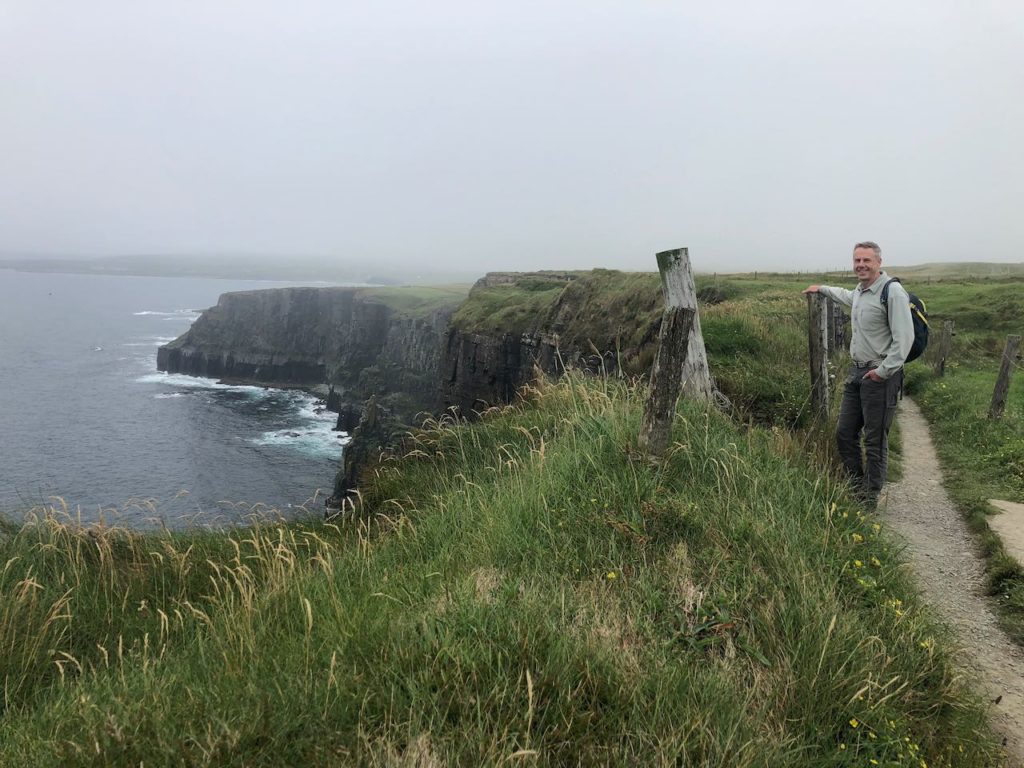 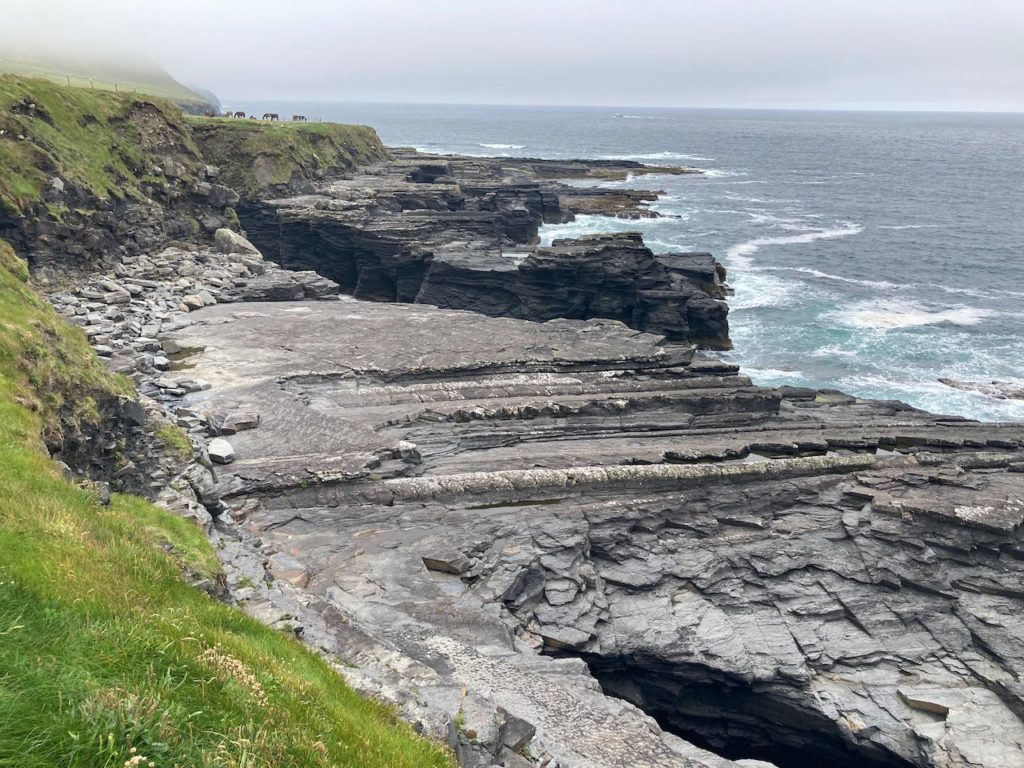 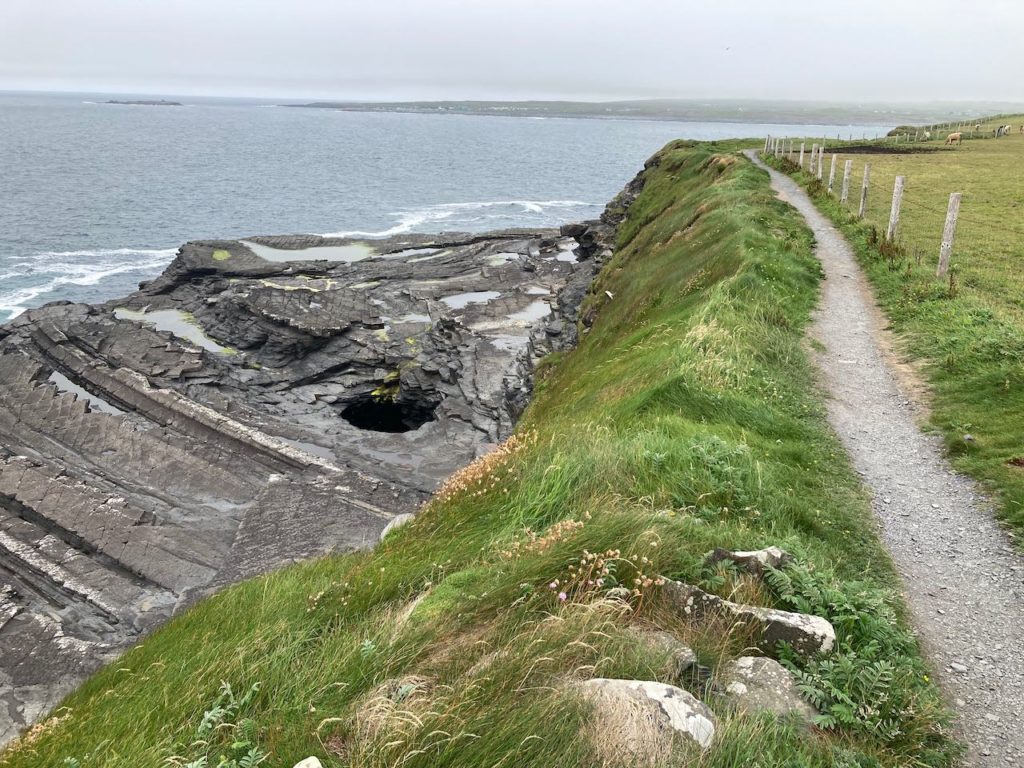 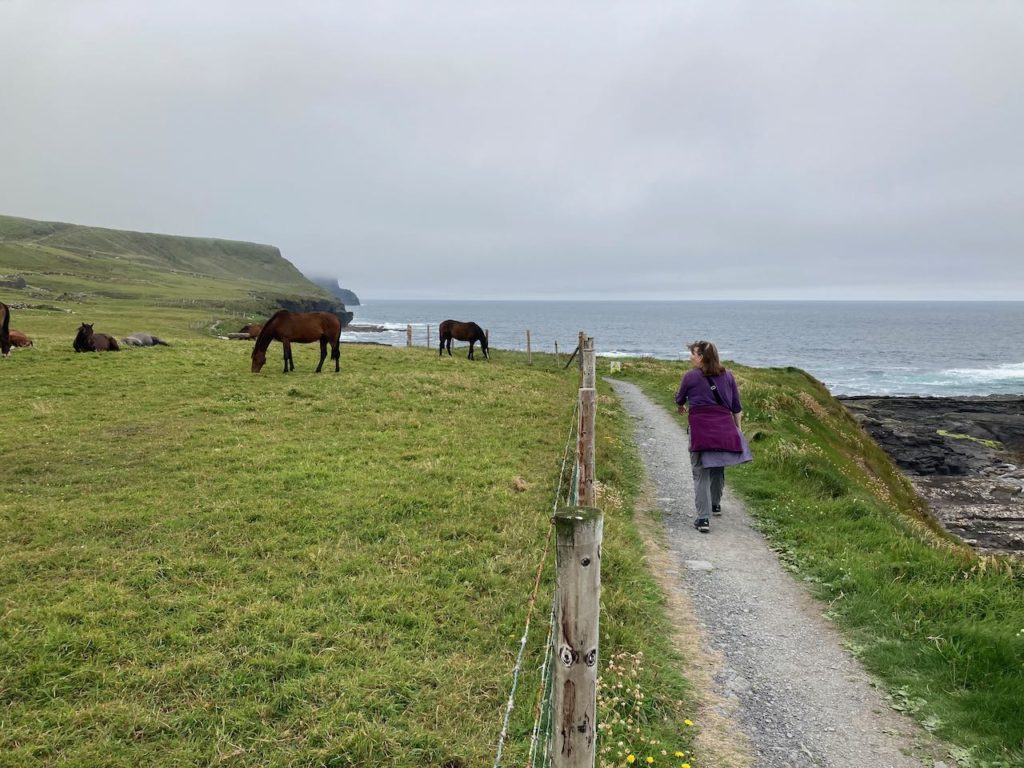 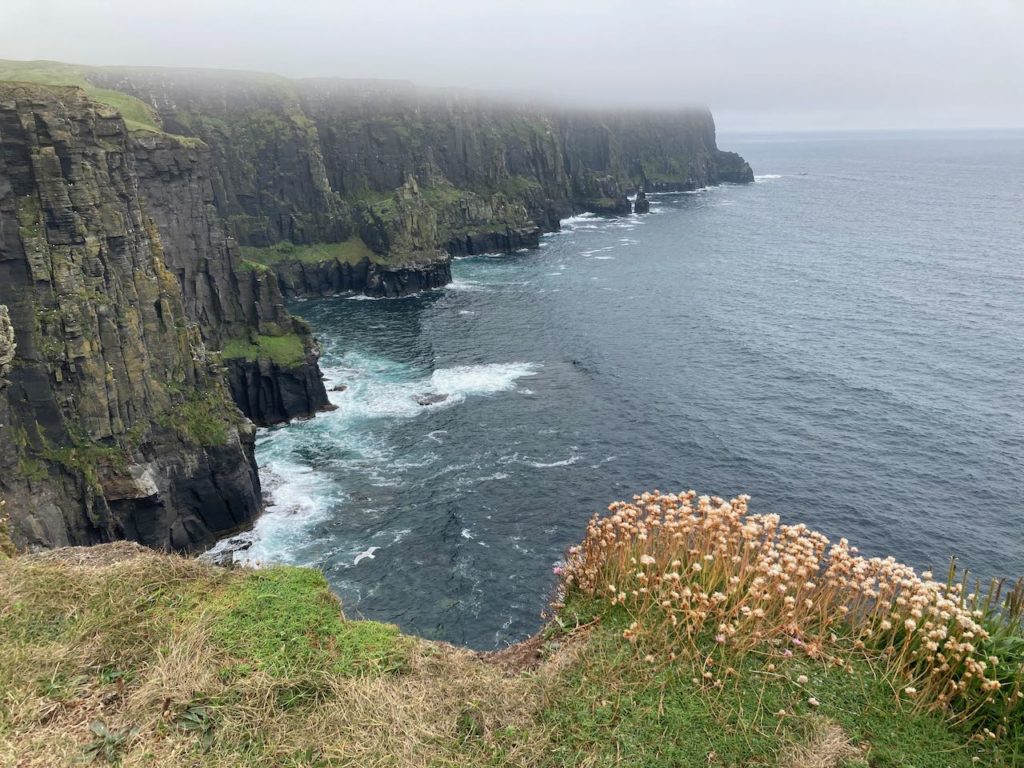 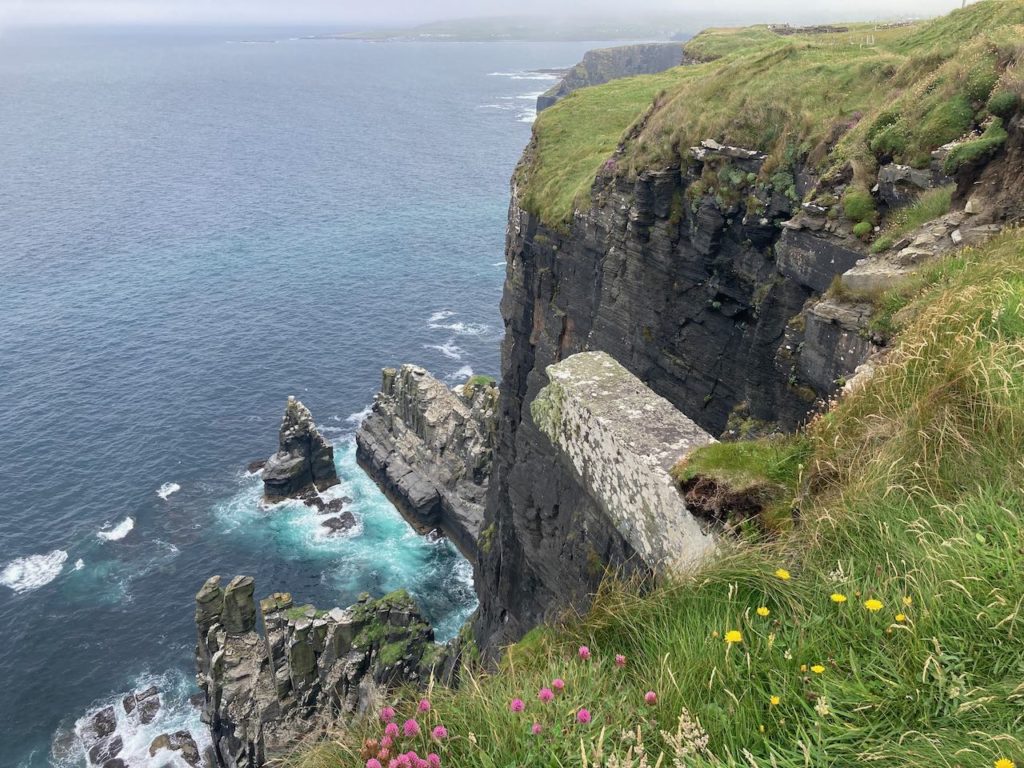 We’d seen signs at the start saying that there was a shuttle service that would take you from one end of the hike to the other, so I figured I’d be able to hop on a bus at the far end and ride back to our campsite. Since there wasn’t much (okay anything) to see of the cliffs at that point, I timed my walk to make the 4 pm bus, which I did, just, only to find a big duct-taped “X” across the bus stop sign. Time for plan B!

I flagged down the first car I saw leaving the parking lot, and two German ladies took me as far as the visitor center – still 1.5 hours from where I needed to be. I tried again to find the bus but found I’d have to wait another two hours. So I stood at the pedestrian entrance to the car park and accosted people on their way back to their cars until I found an American couple willing to drive me the rest of the way.

While Jen and I were hiking, Kathy hopped on a boat tour of the same cliffs. We were in communication as we walked, and before the fog rolled in we could see her boat.

The next day we headed south again, this time for the town of Dingle. As we were passing through the town of Listowel, we saw a sign for the Lartigue Monorail with a photo of what appeared to be a very strange-looking steam engine. We followed the signs and soon pulled into the parking lot of a small museum. Stopping caused Quinn to look up from his videos. Seeing the sign for the museum he said, “Oh, this thing.” Apparently, he’s known about it for some time.

We paid our entry and went in to learn about this strange contraption. The local enthusiasts had received a grant to create a small museum, a section of track complete with switchers and turntables unique to the monorail design, and a working (although diesel-powered) replica of one of the original engines.

We decided to take a mountainous route over Connor Pass, and as we drove up through the clouds on a winding single-lane road we were wondering what we were doing there since we couldn’t see anything anyway. But about 5 minutes down from the pass, the clouds suddenly evaporated and the sun shone through to illuminate Dingle Harbor! This led to several uninterrupted days of more sunshine than we’ve seen in weeks. 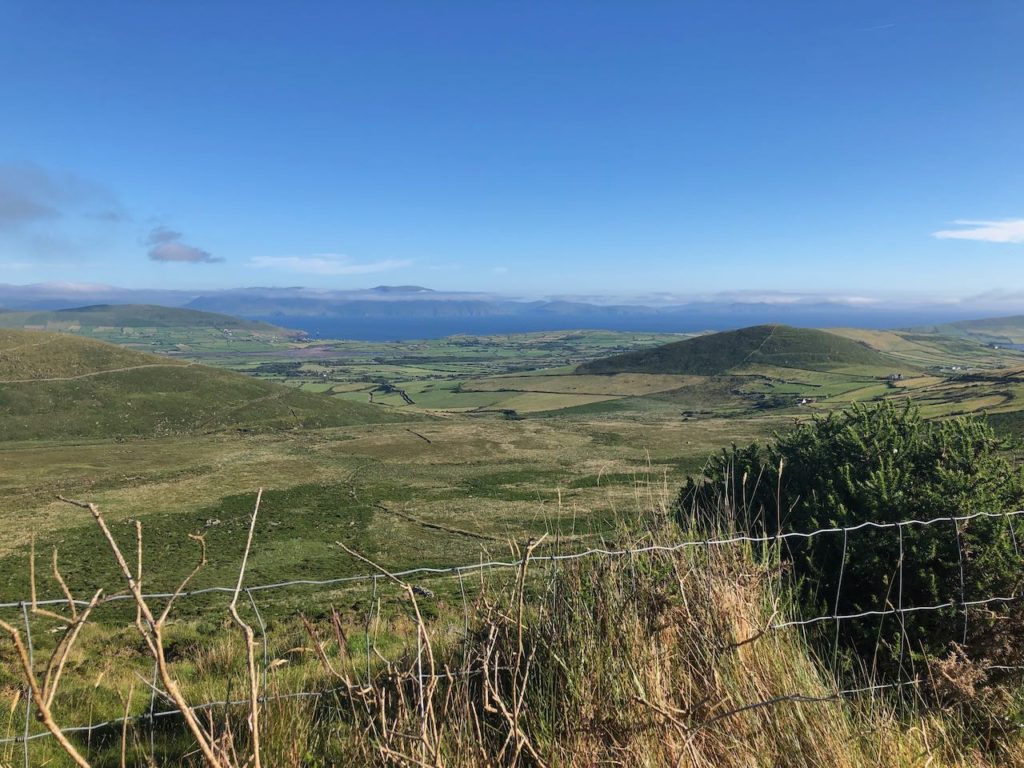 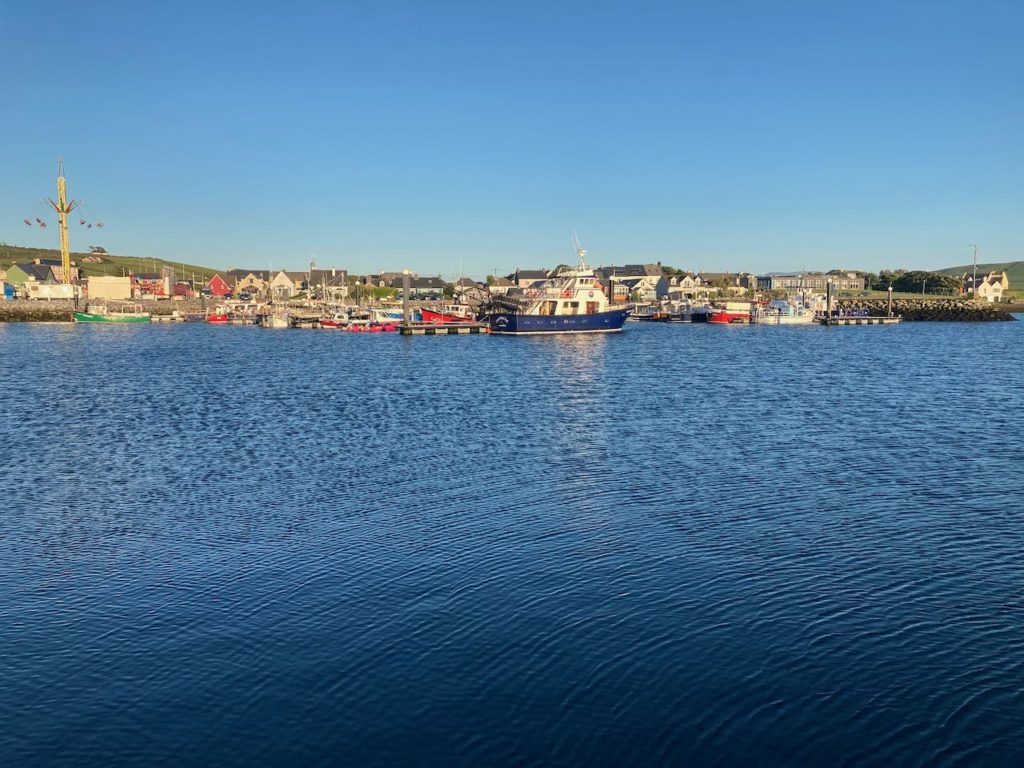 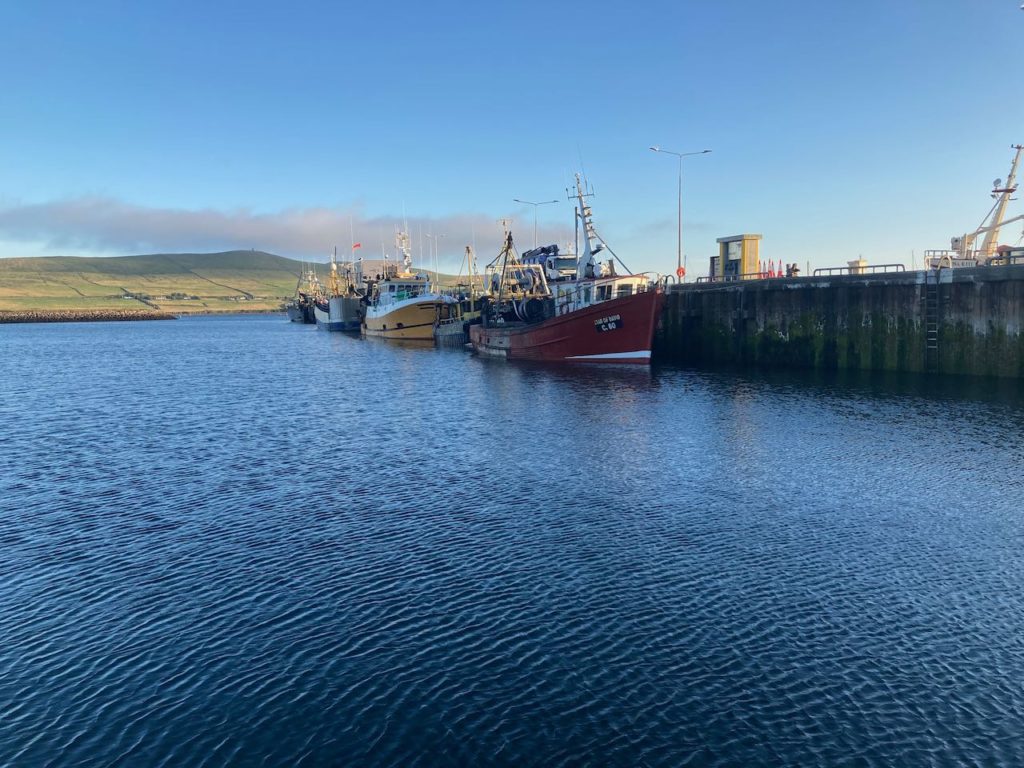 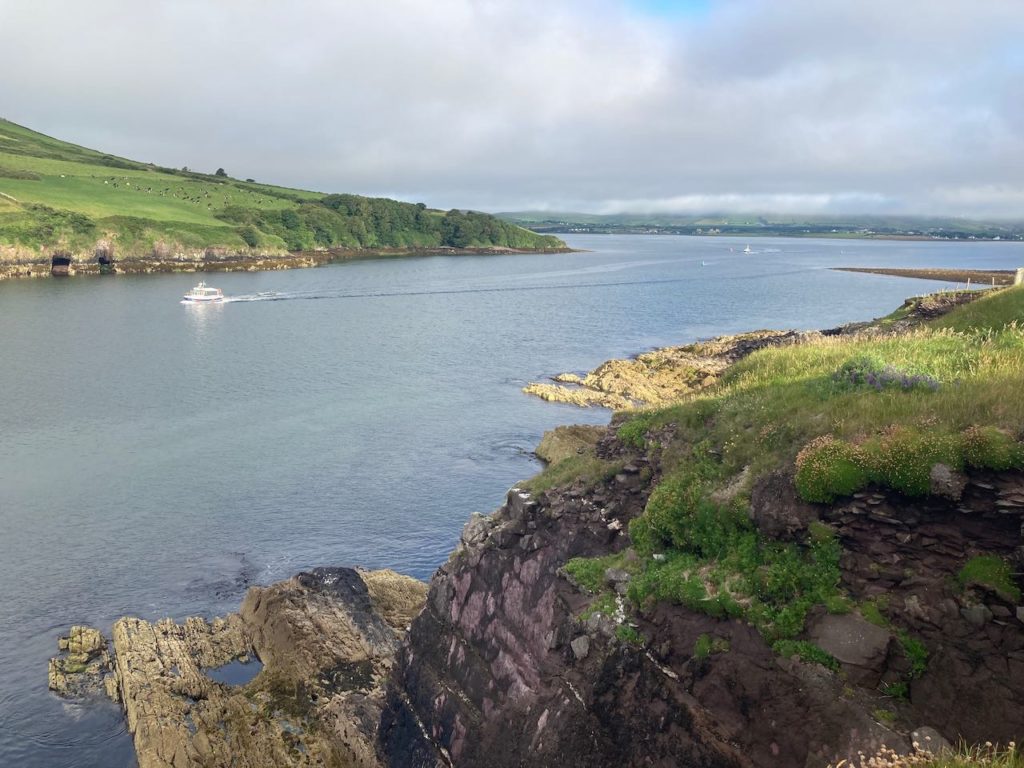 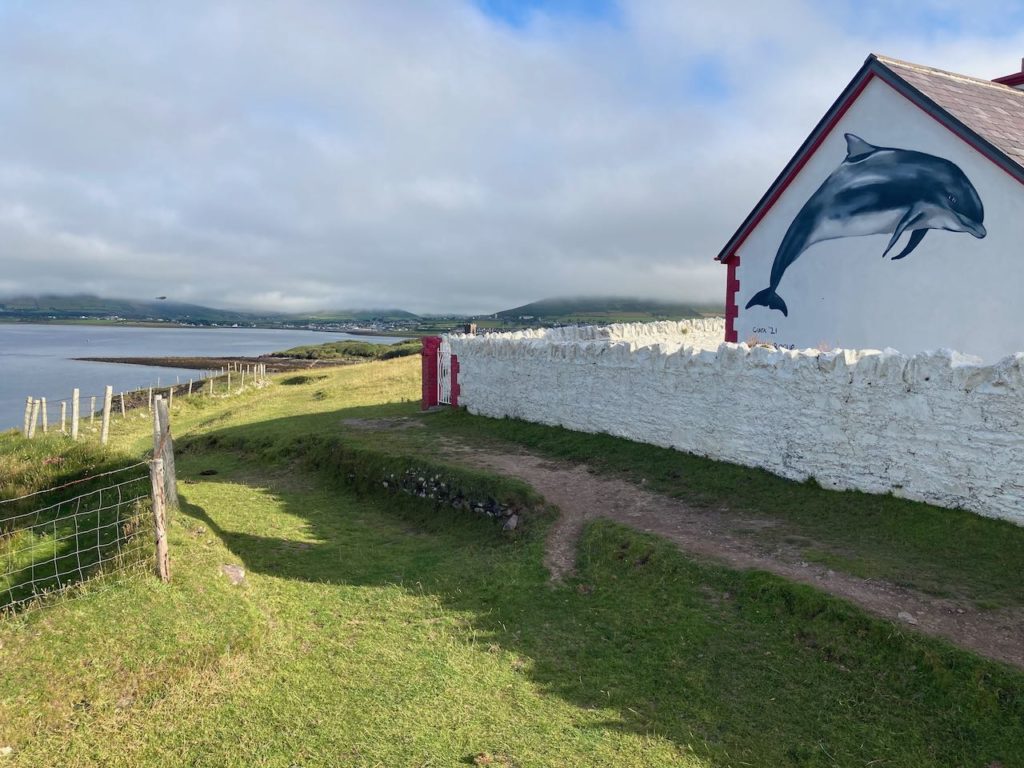 One of the fun things about Ireland is that many pubs have regular “Trad” sessions where local musicians drop in and play traditional music. Dingle is famous for this, and the many pubs in town all have music sessions. We dropped in on one of them the evening we arrived. The music wasn’t as rousing as the show we went to in Galway, but it was a lot of fun and for the price of a few beers well worth it!

So long, and thanks for all the fish

Dingle is famous for a dolphin that arrived in the harbor in the 80s and stayed, becoming a local tourist attraction with boats going out daily to watch him perform. We found out that the dolphin disappeared about a year ago, but he’s memorialized with a statue in town and several shops named for him.

We spent most of the day in town visiting a local aquarium and enjoying an outdoor lunch before heading to our next destination.

The Ring of Kerry is another well-known tourist route around a small peninsula on the West coast. We started by driving through the mountains over the Gap of Dunloe, an even narrower and twistier route than Connor Pass into Dingle. Another sunny day gave us amazing views. 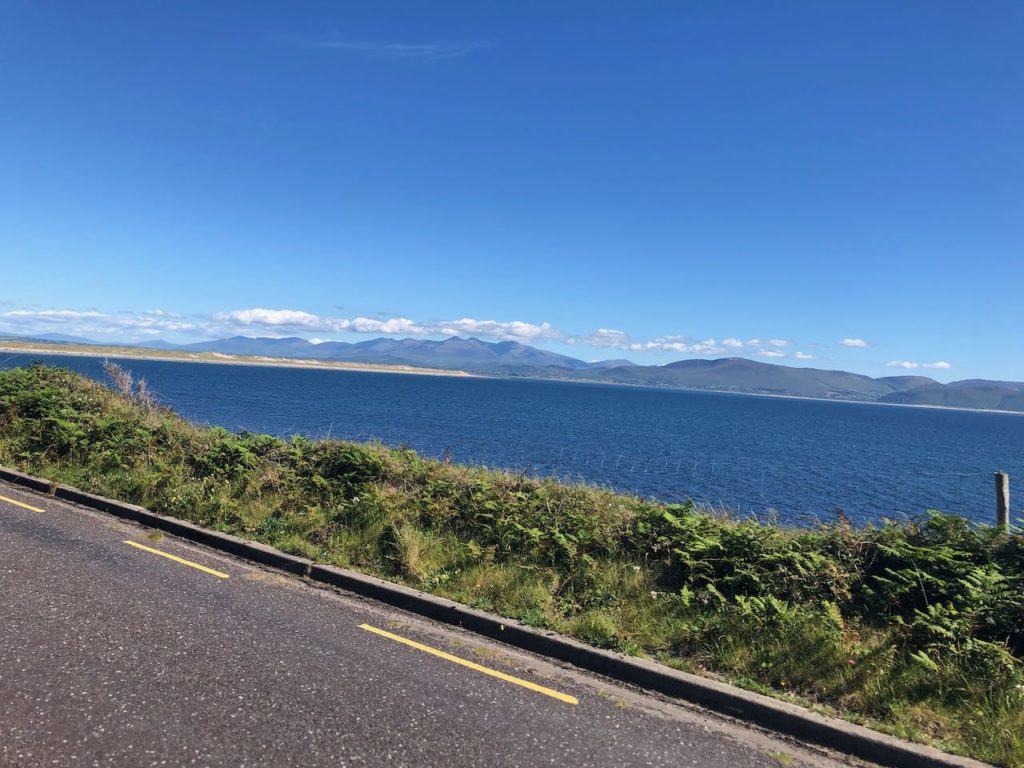 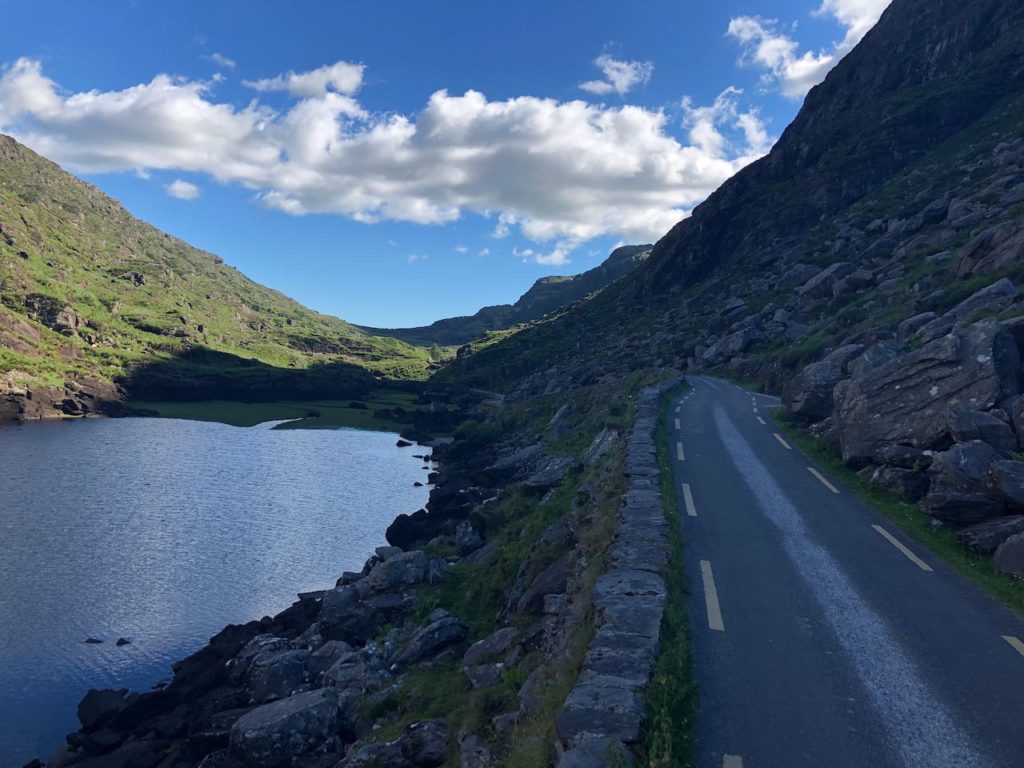 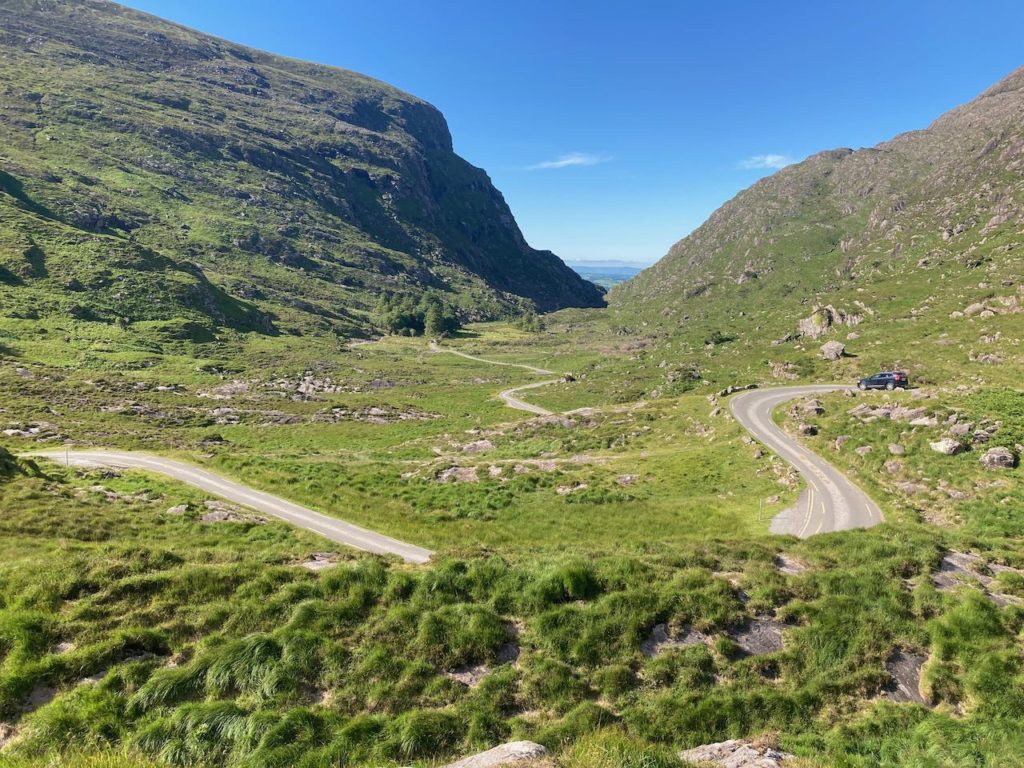 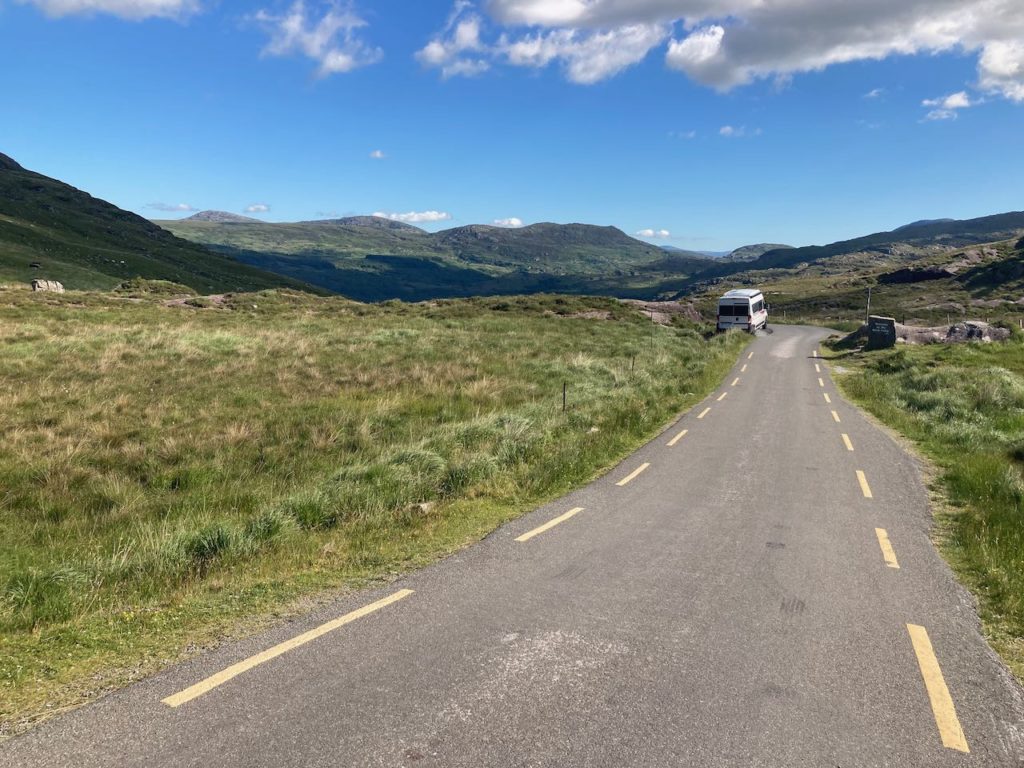 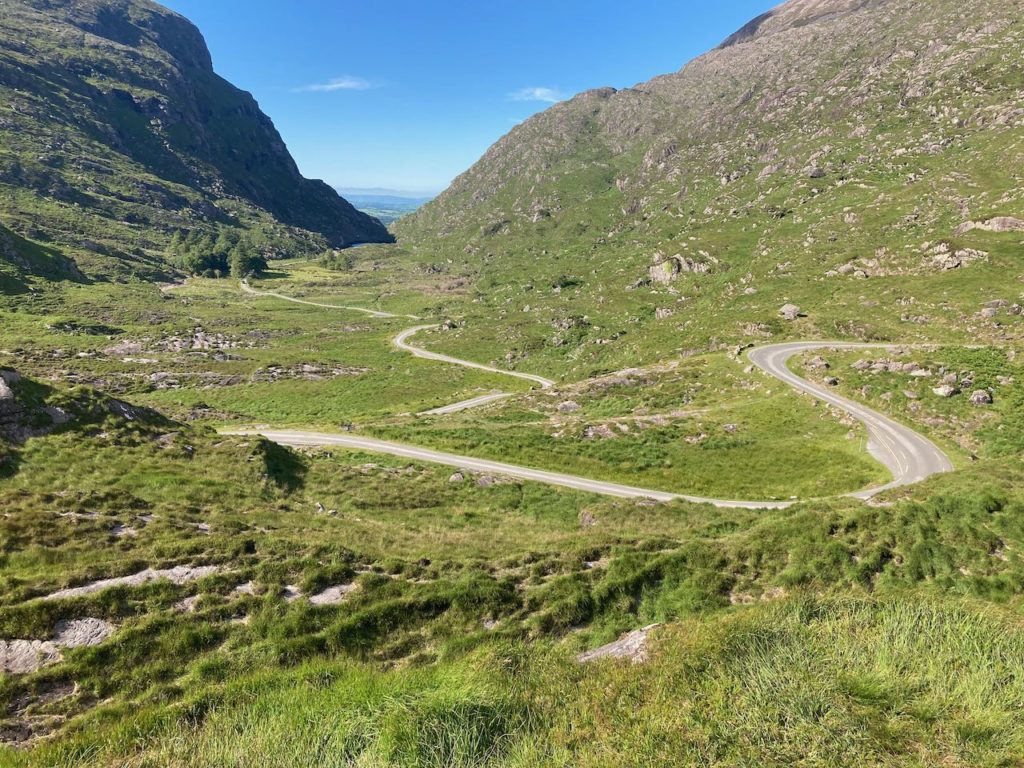 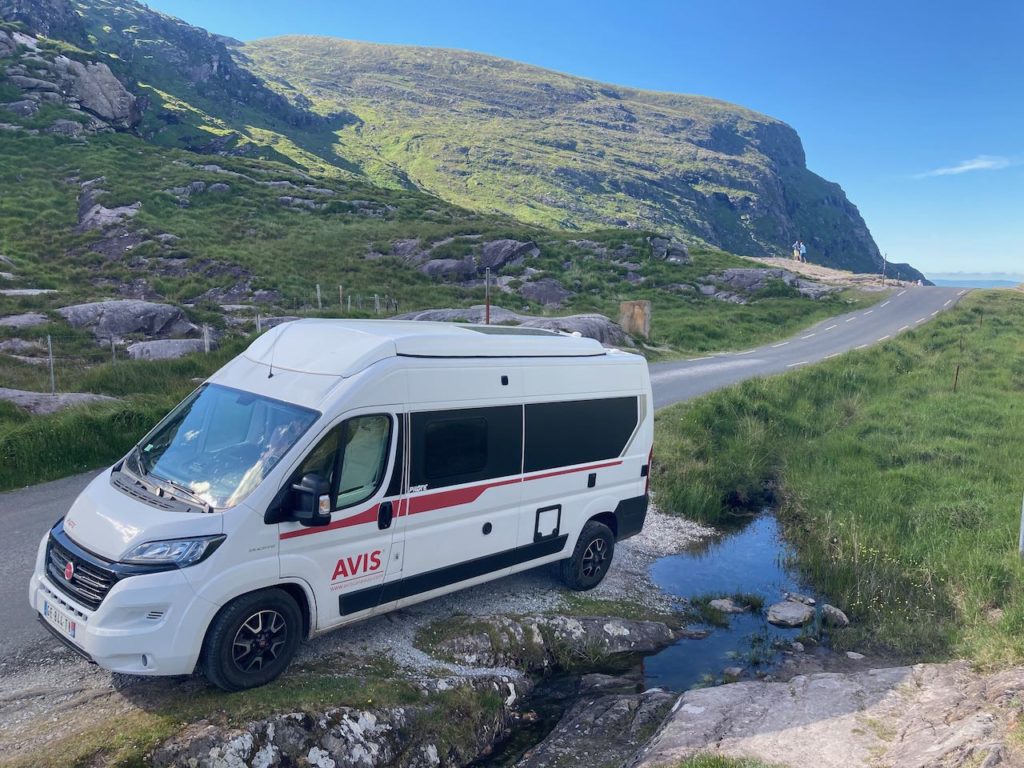 We camped for the night in one of the few wild camps we’ve done on the trip, pulling off the narrow road and enjoying the views and a very quiet night. While we were parked there, two cars stopped. The first was a French couple who recognized our French license plates and specifically the region of France the car was registered in. They started speaking to us in rapid-fire French. Jen quickly explained in French that we don’t actually speak much French, and he laughed explaining that Rousillon-Languedoc is France’s least populated region and is where his family is from. Apparently, it’s also where Avis registers their rental vans!

About 30 minutes later an Irish man stopped just to say hi and give us a six-pack of beer. Ireland is my new favorite country!