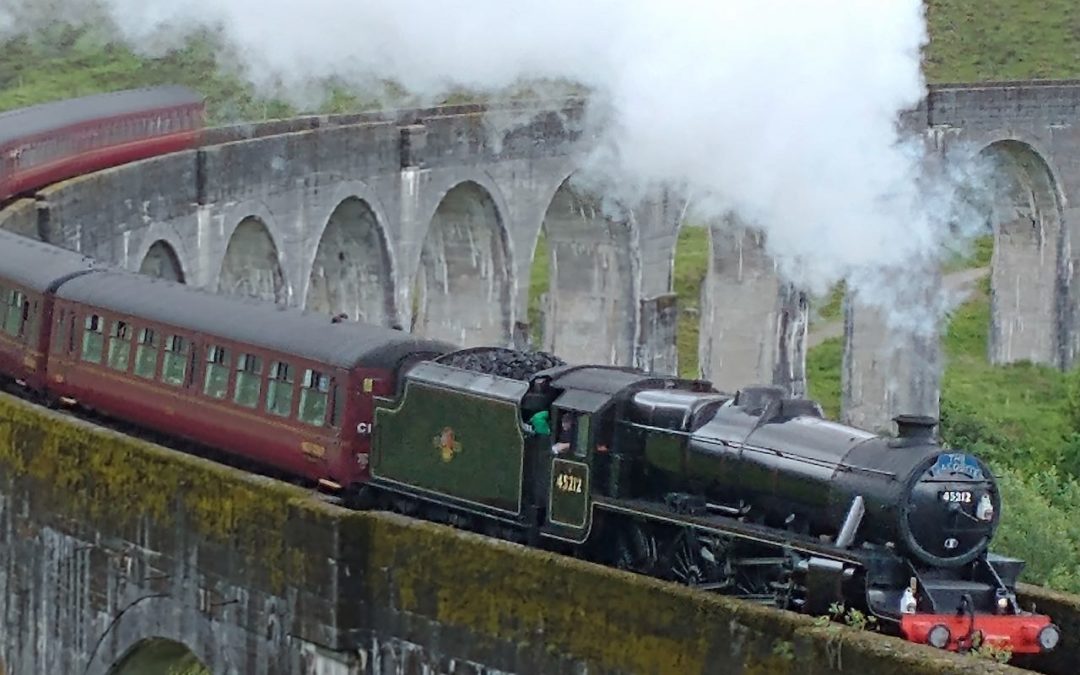 Our first stop in Scotland was at one of the “7 Stanes” mountain biking centers. Jen and I braved the rain and rented bikes for a couple of hours. Riding through the misty and moss-laden forest in the rain was very different from the desert biking we’re used to at home. I think the guys in the rental shop were sort of wondering what we were doing there, but we figured that we were getting the full Scottish mountain biking experience. 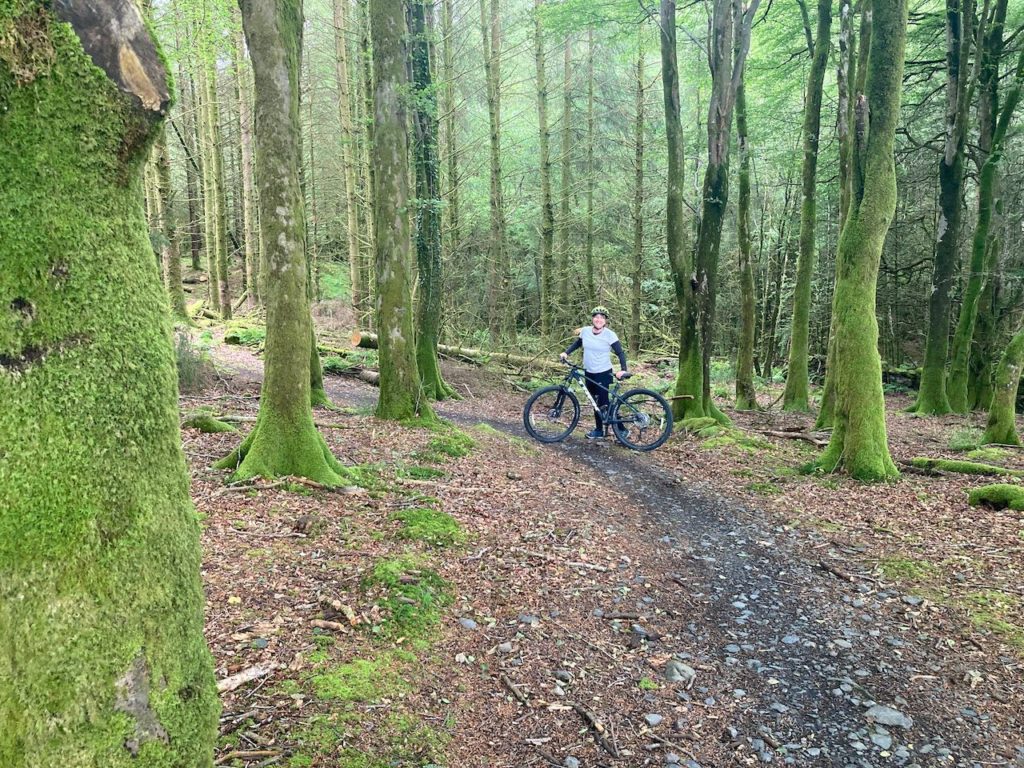 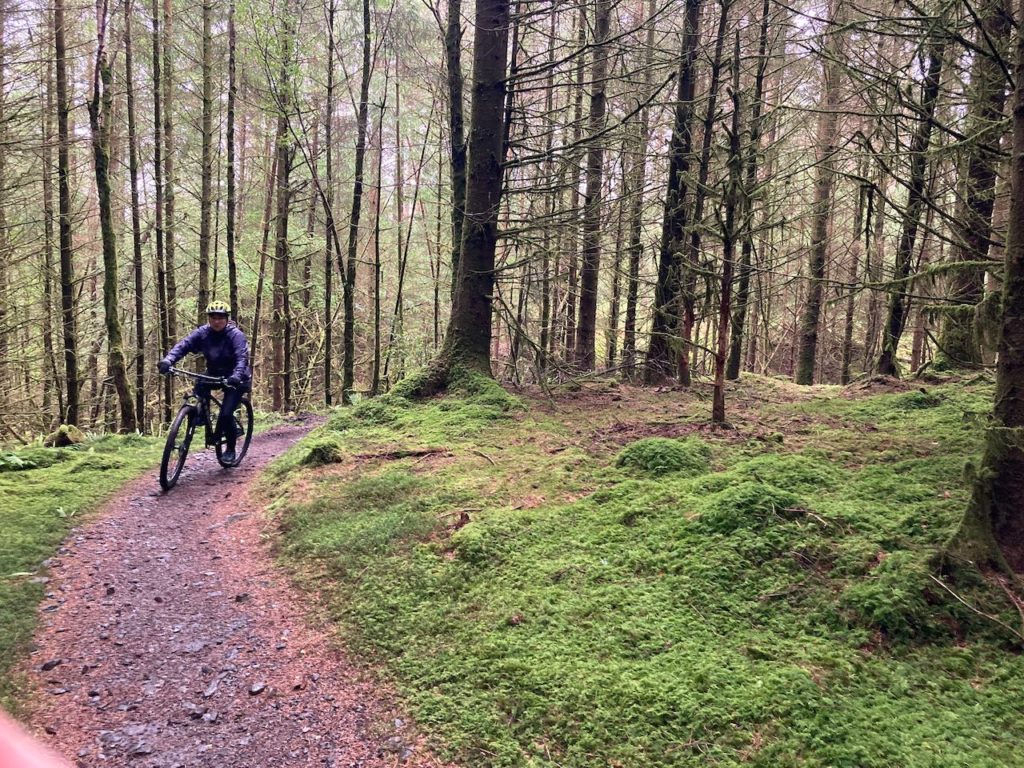 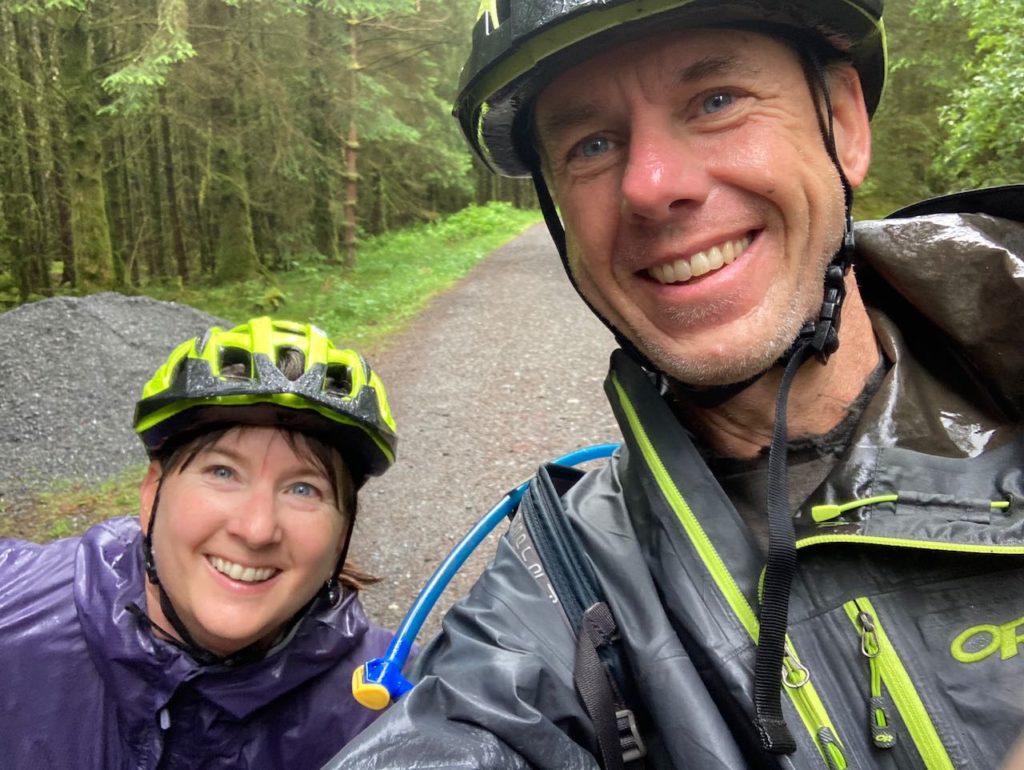 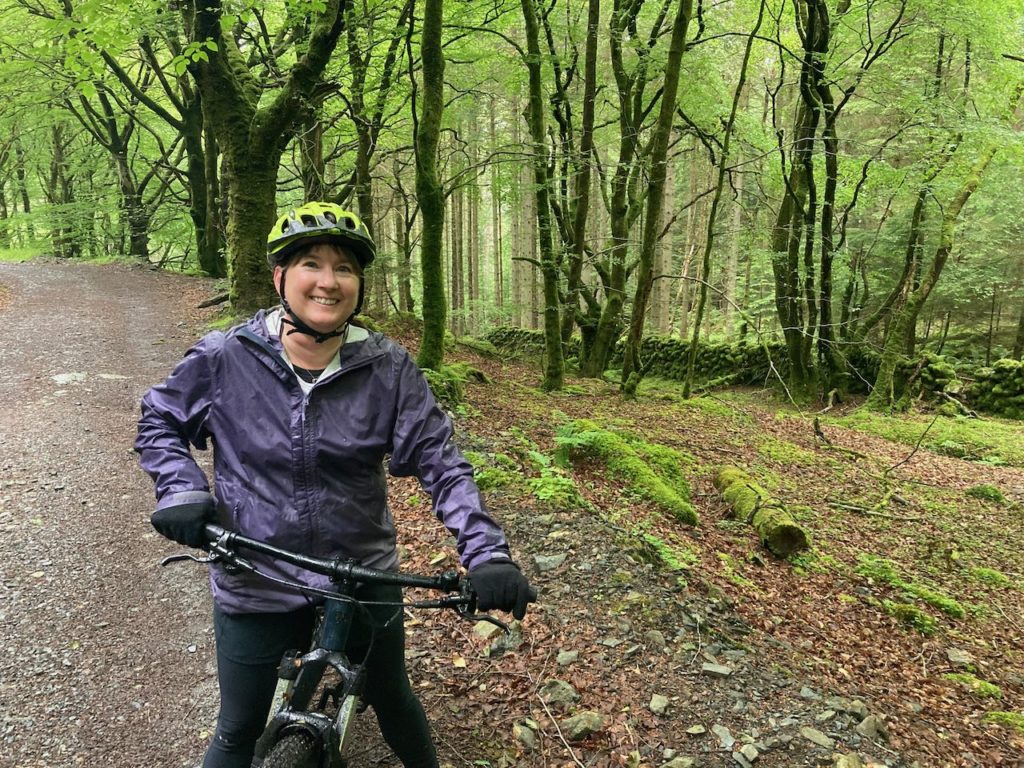 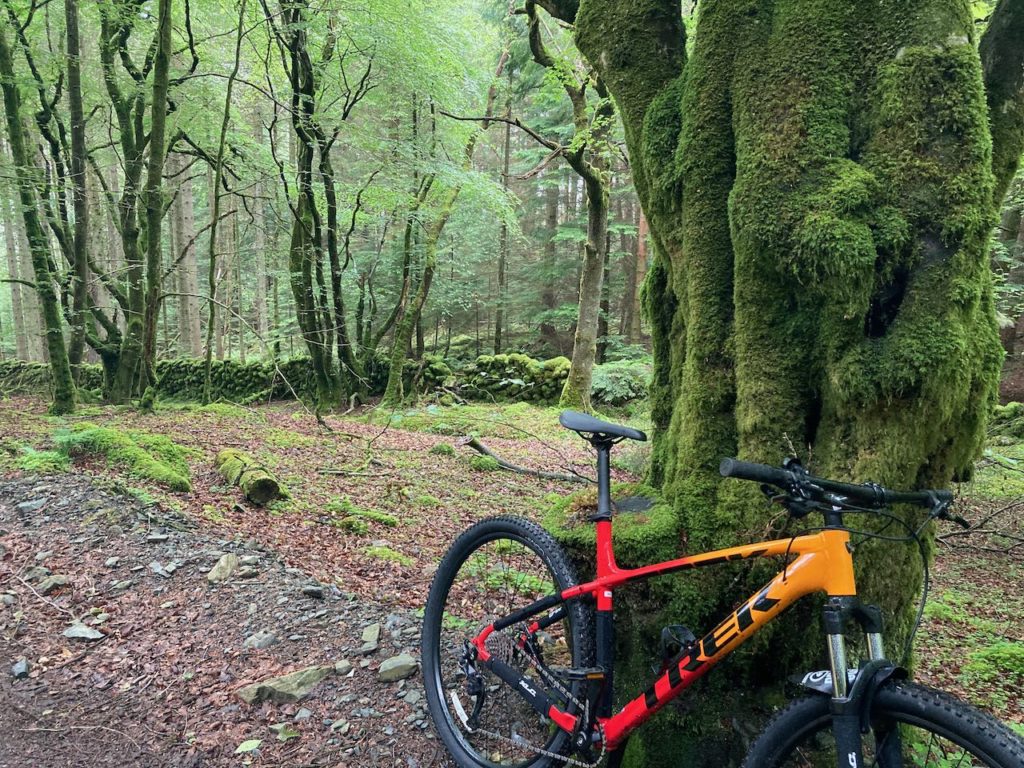 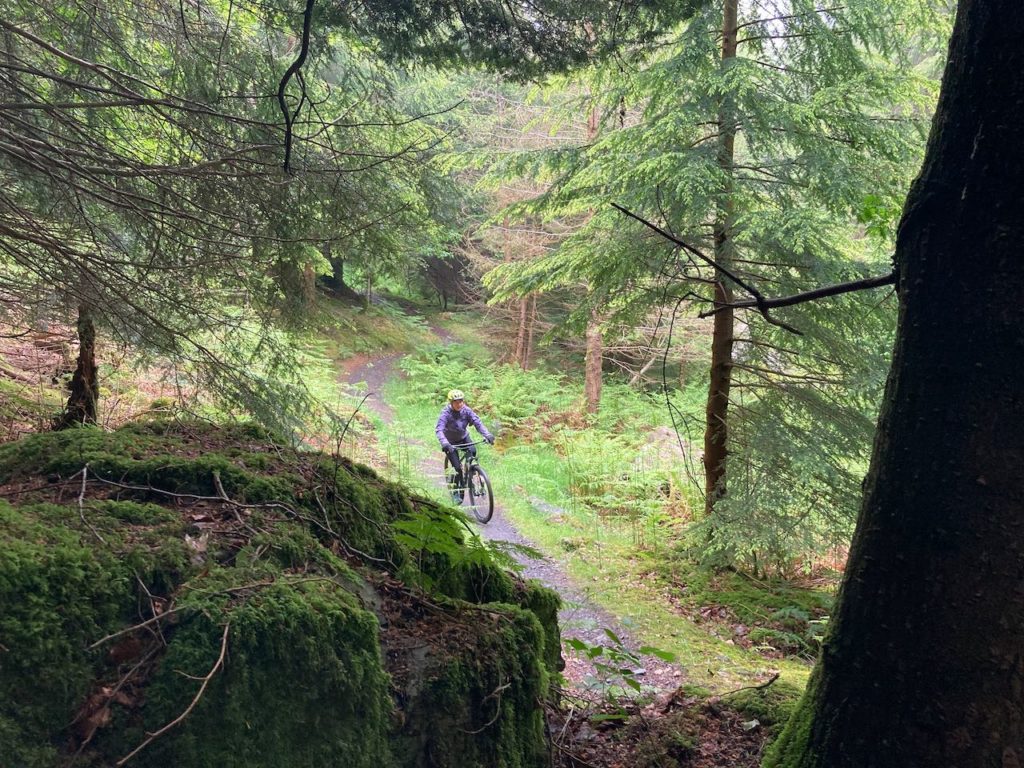 That night we stayed at a campground near Culzean Castle. It was a short distance from the castle, and we enjoyed walking through the grounds after visiting hours. There were a number of people sitting in camp chairs all staring at various buildings in the fading light. Curious, we asked and found out that they were counting the bats that resided in the attics.

No Old Rocks in Glasgow!

We’d been debating whether to go to Edinburgh or Glasgow, and in the end decided on Glasgow because Jen, Quinn, and I visited Edinburgh a few years ago and because we’d heard about a good science museum there. We camped in the museum parking lot for two nights. The afternoon we arrived we visited a very cool transportation museum that featured everything from steam engines to vintage RVs. Nearby a sailing cargo ship (the GlenLee) was moored on the River Clyde. The ship was built in Glasgow and traveled all over the world before returning “home” and being restored as a museum. In an obscure bit of historical trivia, Fred Noonan, Amelia Earhart’s co-pilot, and navigator served aboard the vessel for a number of years before turning his gaze skyward.

The next morning we went to the science museum where we discovered that they have full-motion flight simulators. We didn’t hesitate, paying the £30 extra so that Quinn could have a go. It was well worth it; Quinn sat in the pilot’s seat and I was his co-pilot as we took off from the Telluride airport and landed 20 minutes later in Montrose! The rest of the day was equally enjoyable. The museum was firmly aimed at keeping kids engaged, with dozens of interactive exhibits on a variety of subjects.

We also found time for a bus tour of the city that took us to some of the famous sites around town, as well as a tour of a small distillery and some craft beer. While it’s not the tourist haven that Edinburgh is we’re very glad we stopped in Glasgow! 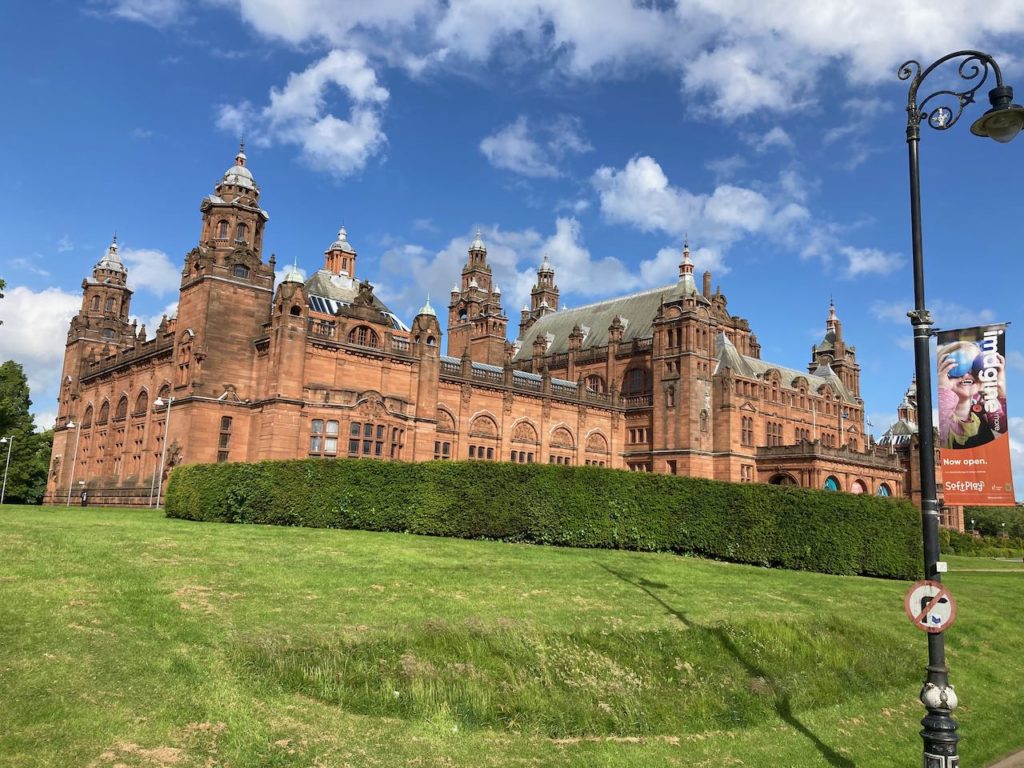 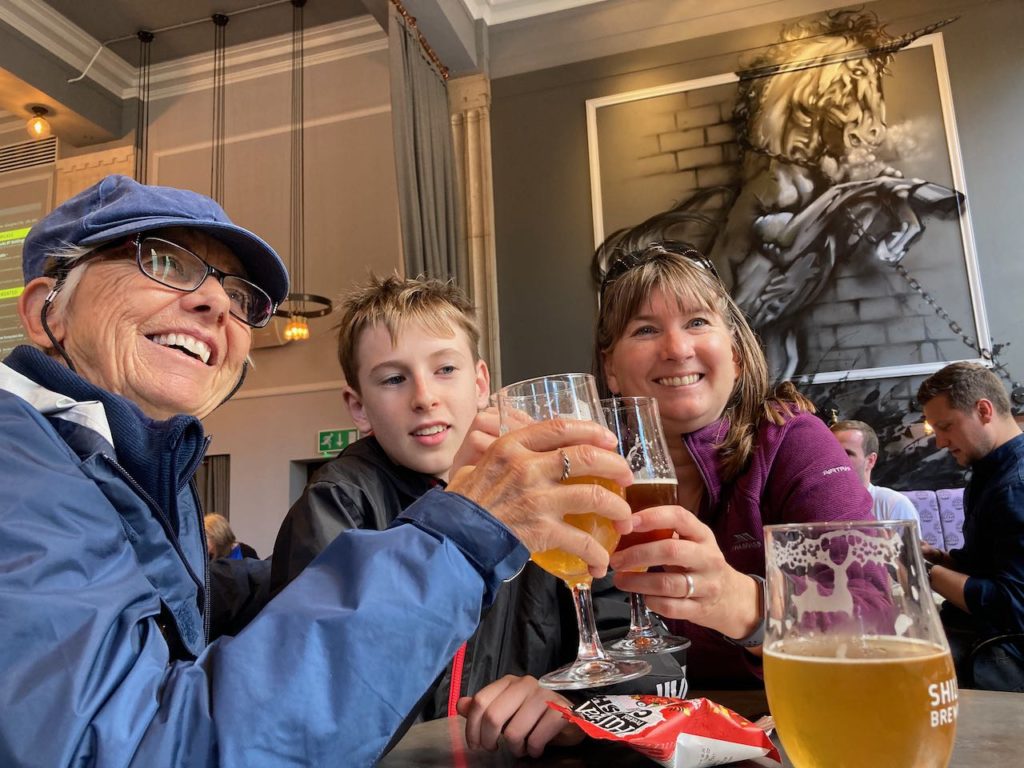 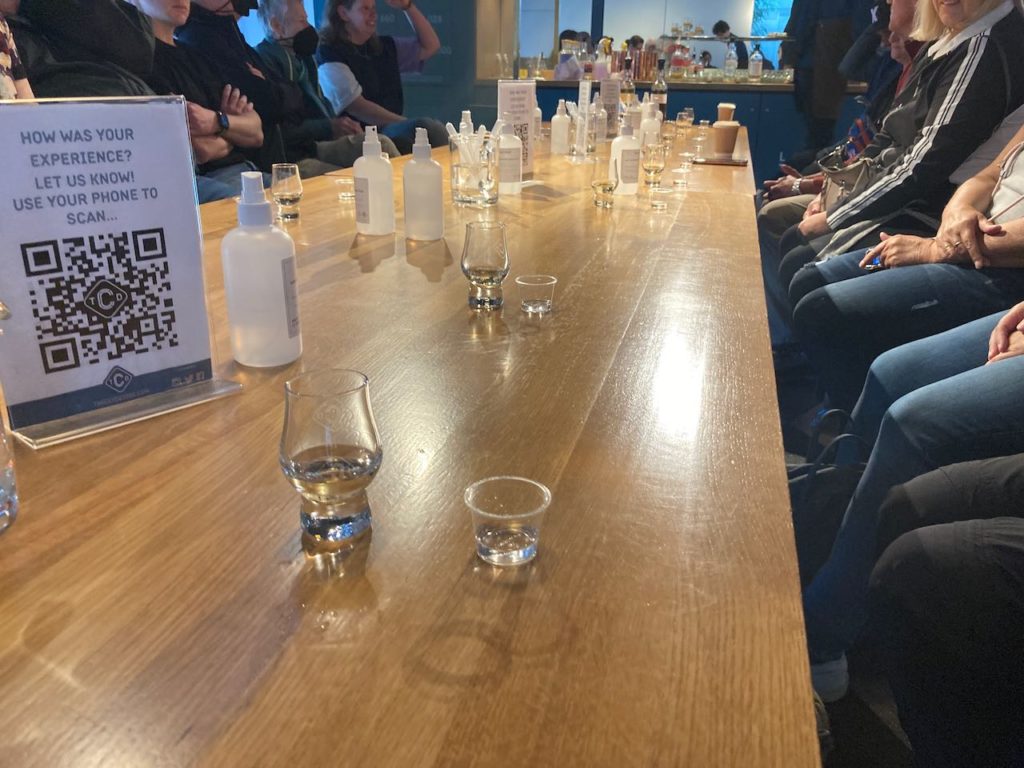 Leaving Glasgow we headed north past Loch Lomond to Fort William, home of the Jacobite steam train and the Glenfinnan Viaduct. The viaduct was made famous by the Harry Potter films — the Hogwarts Express traverses the bridge in two or three of the movies. The steam train from Fort William to Mallaig across the viaduct is a classic steam journey. When we tried to book tickets online it looked like they were booked out through August. We decided to head to the station anyway to see if we could get a cancellation. It turns out they keep an extra coach open that can’t be booked online. We had to queue for about an hour, but in the end, we got tickets and boarded the train.

The next day we drove along the route the train takes, stopping at the viaduct for photos. The nearby town does a brisk business selling parking in a lot they created for tourists to park and photograph trains crossing the viaduct.

Check out Quinn’s video of the Jacobite steam train crossing the Glenfinnan Viaduct: 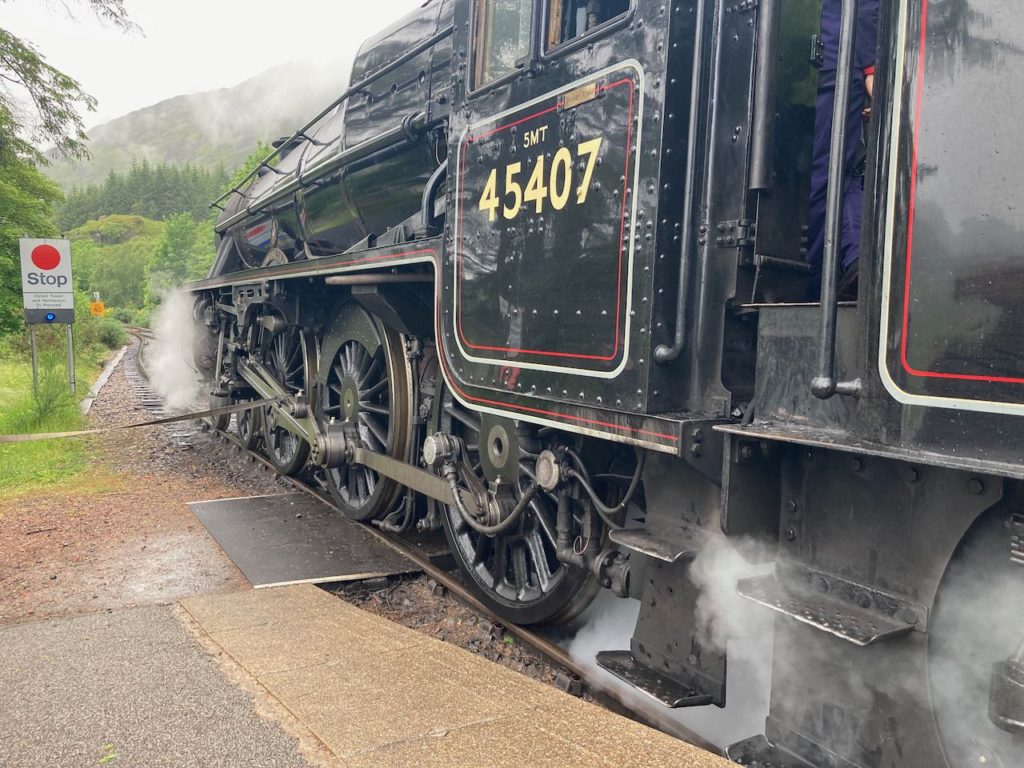 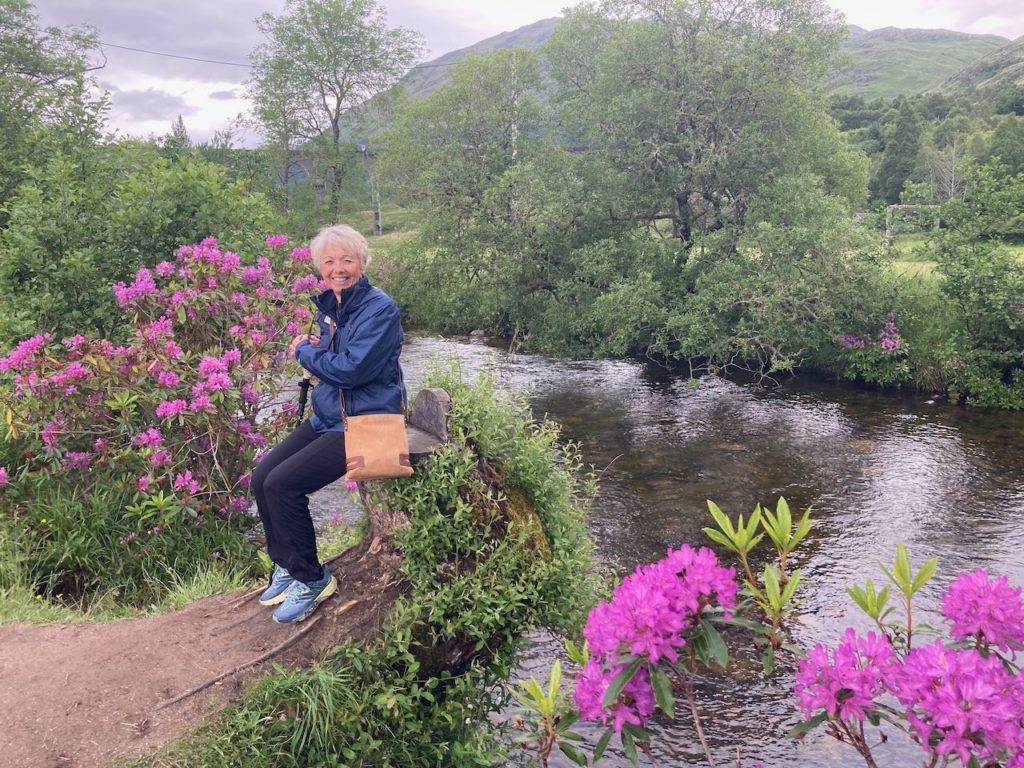 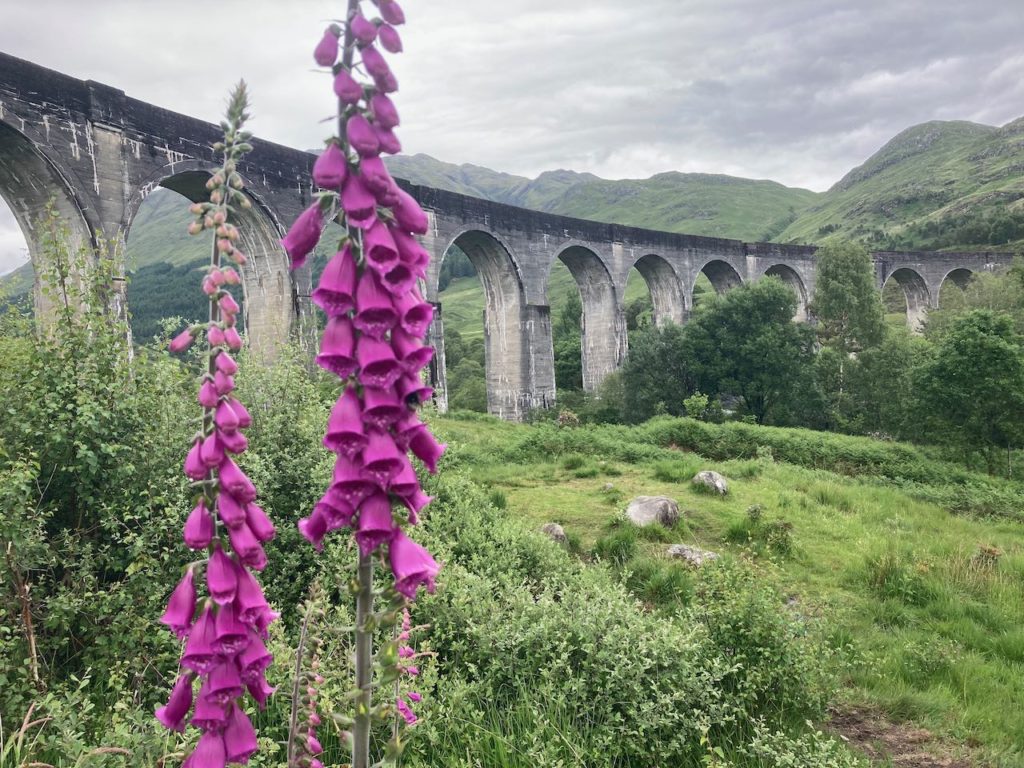 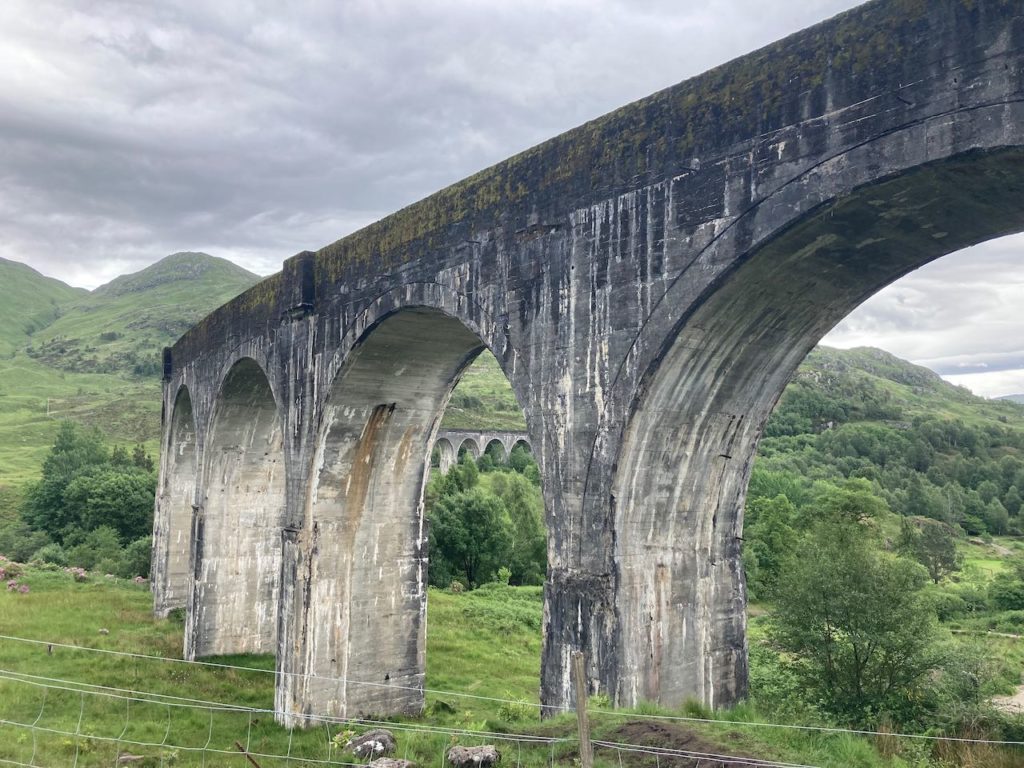 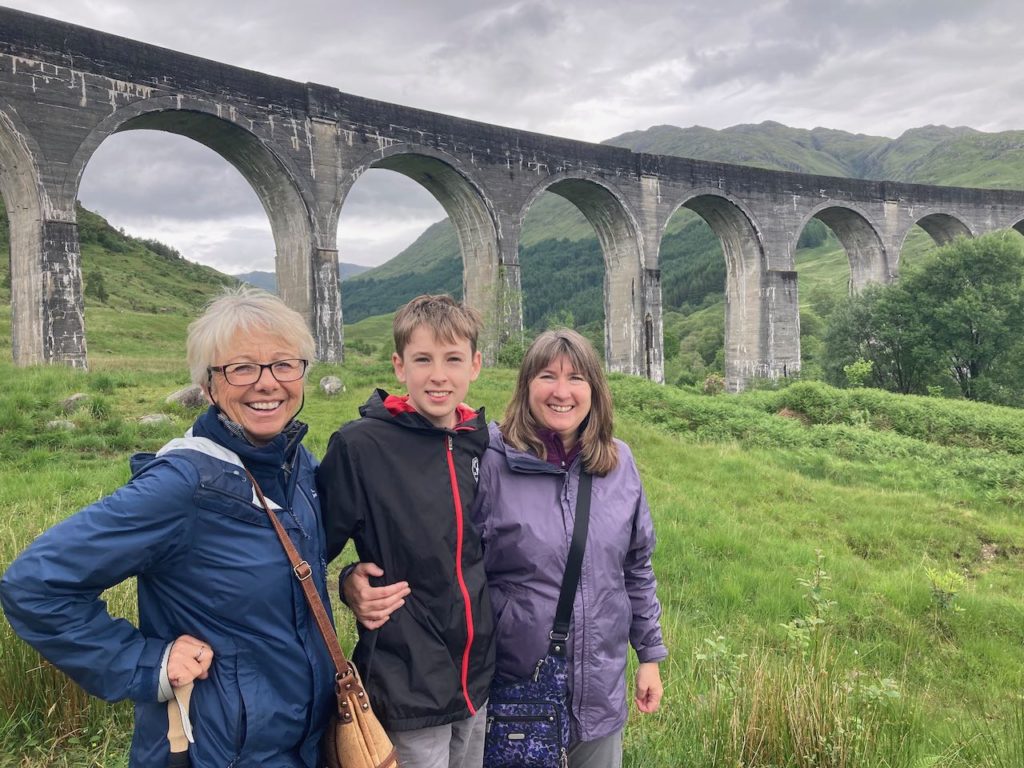 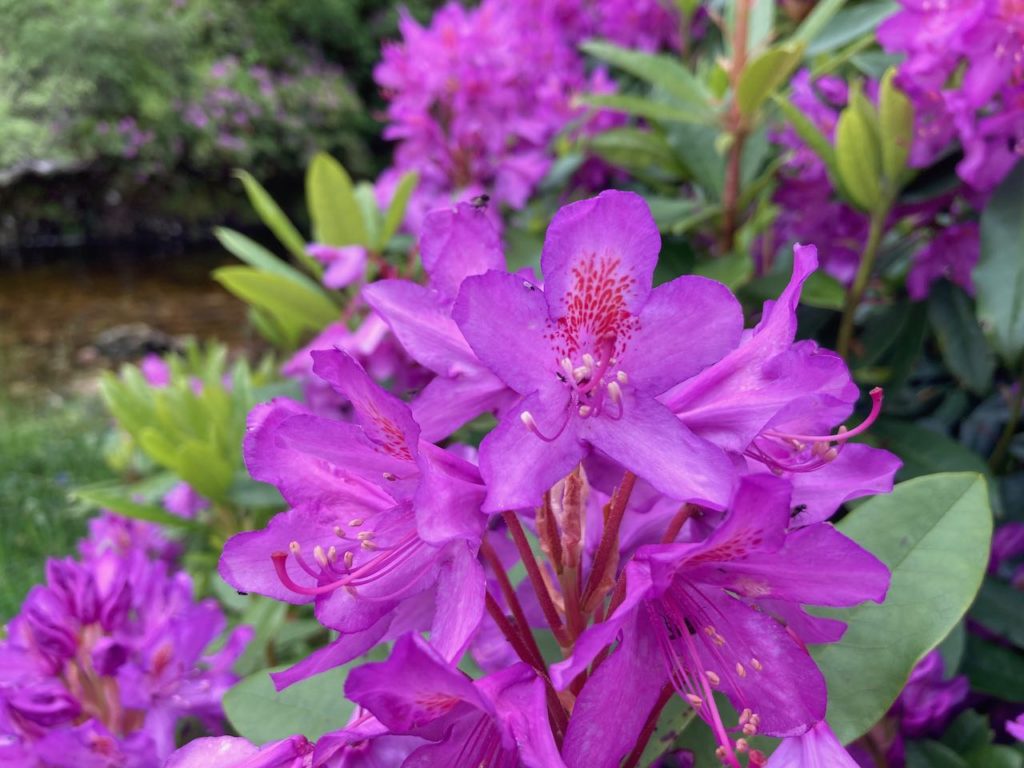 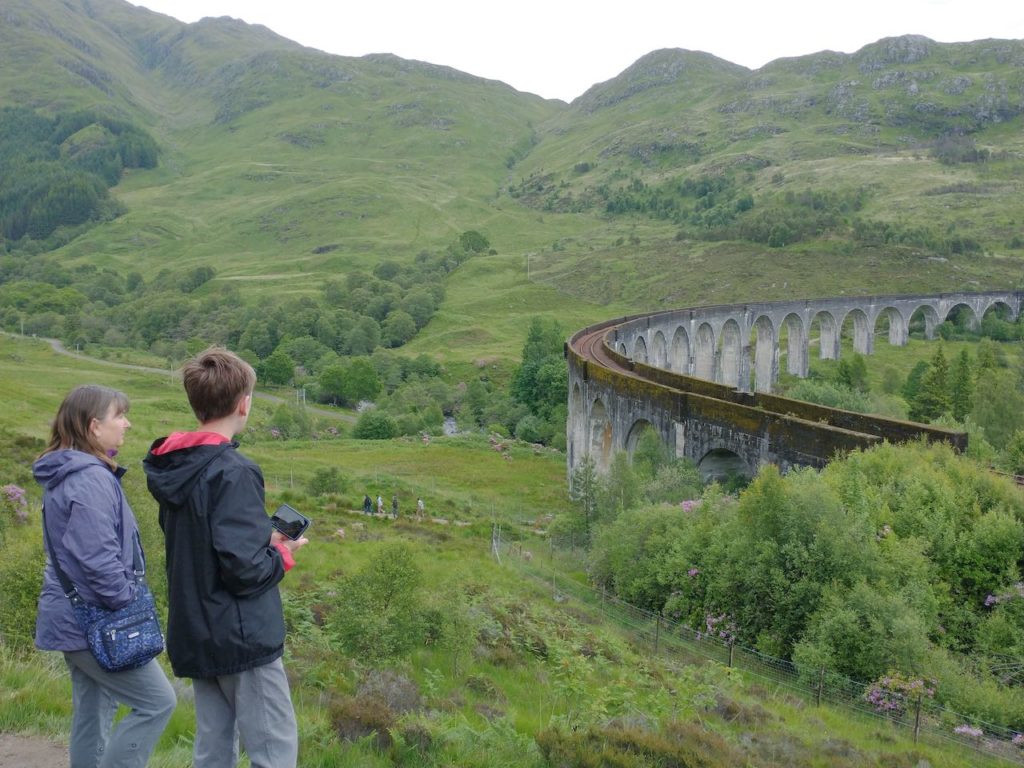 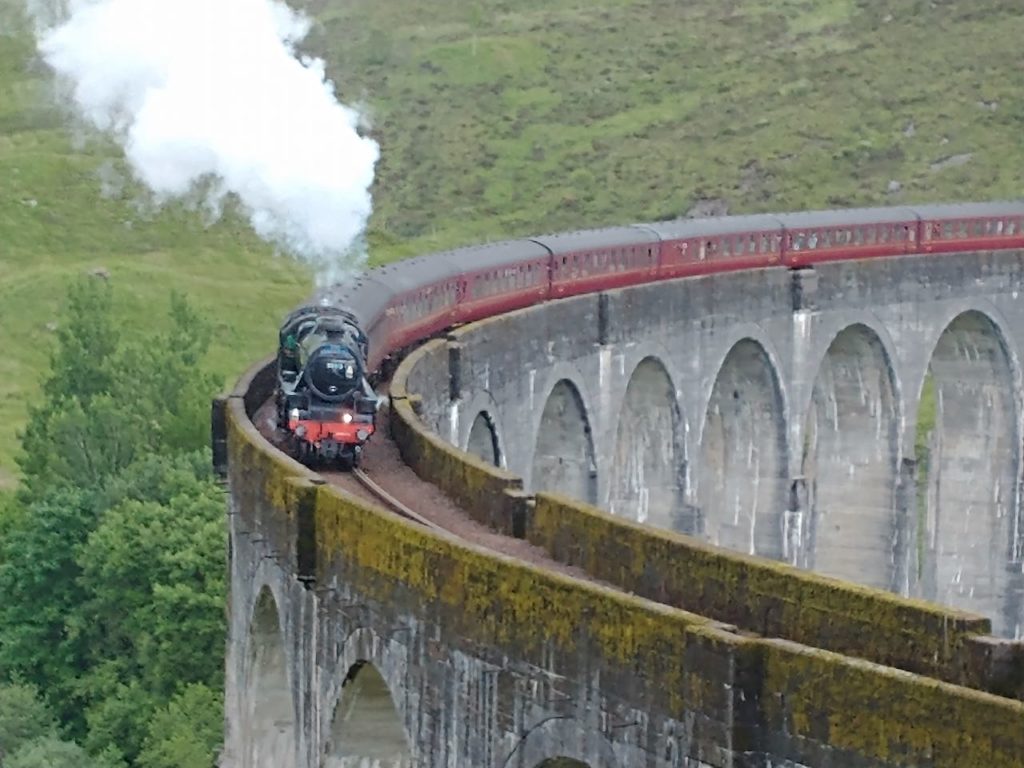 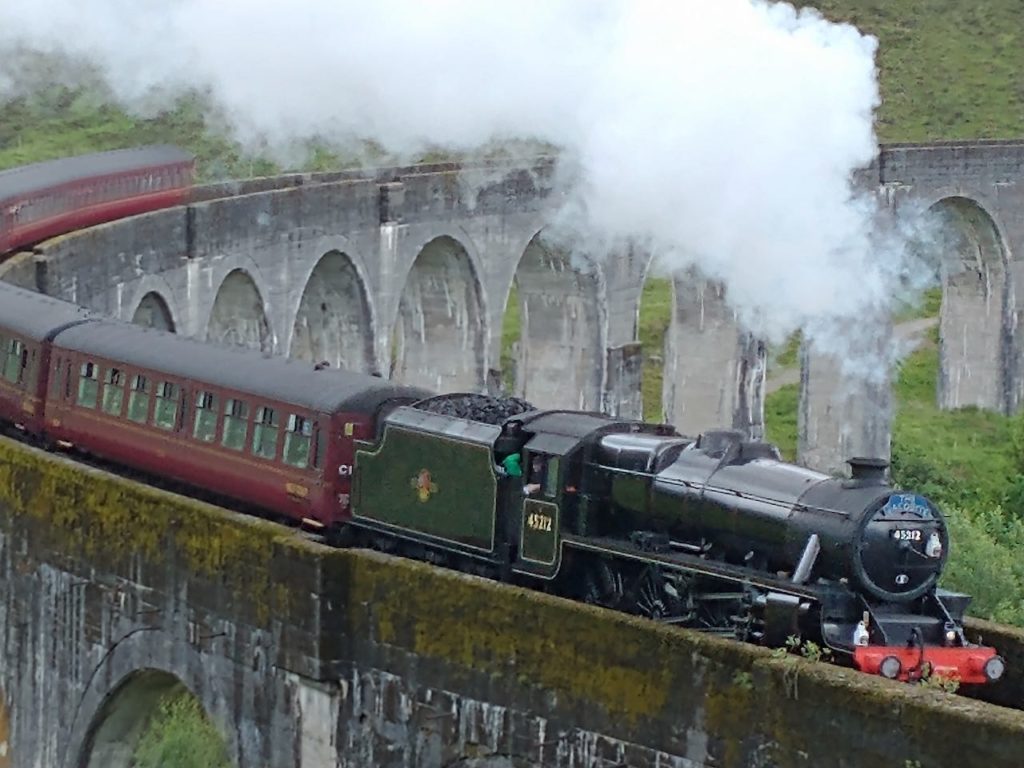 The Isle of Skye is meant to be one of the most spectacular locations in Scotland. We made a plan to take the ferry from Mallaig to the island, drive across the island and get another ferry to the Outer Hebrides. There we’d head north before taking another ferry back to the mainland. First, we had to get to Skye, and as usual, we left the booking until late and were fortunate to find space on a ferry for the next day at 8 am. Most of us are fast asleep at 8 am, and I think the last time Quinn was awake that early was three months ago when we flew to Paris. So we just let him sleep in the back of the van while we drove to the ferry for the 45-minute trip to the island. It was only when we stopped at a restaurant for breakfast on the other side that he decided to join us. “What? We were on a ferry?”

It turns out that Skye and the North West of Scotland are known for being wet. In fact, we’d learn later that the northwest region receives twice as much rain as the eastern part of the country. It’s beautiful when the sun is out, but in the rain, you can’t really see anything at all. We found a campsite near the sea that would have been beautiful in nice weather!

With wind and rain beating against the side of our canvas pop-top all night long, Jen and I were eventually forced to close the top and sleep in the front seats of the van. Needless to say, we didn’t get much sleep. The next day was Jen’s birthday, and we celebrated by going to a very nice restaurant near our campsite. It was a bright spot on an otherwise very gloomy day.

Despite it being mid-June, we’ve been running the heater in the van most mornings, and we’ve finally decided that enough is enough. It’s time to find some sun! We heard that the East side of Scotland is drier than the west, so we abandoned our plans to go to the Outer Hebrides and headed east. Before we left, we stopped in Portree for a wildlife boat tour. The wind was still brutal, but the bay we were in was fairly sheltered so the waves weren’t too bad. Probably the best part of the trip was watching the other passengers’ reactions to the dolphins. Be sure to turn on your sound:

One thing that’s nice about Europe is that it’s compact – It only took us a couple of hours to get from Skye all the way across to Inverness. We drove along Loch Ness on the way, but unfortunately, we weren’t able to get a glimpse of the famous monster!

In Inverness, we visited the Culloden Battlefield, where the British defeated the Jacobites who were fighting to restore the exiled “Bonnie Prince Charlie” to the British throne. After a bit of history, we found a pub in town for some nice salmon and beer, and a stroll along the waterfront.